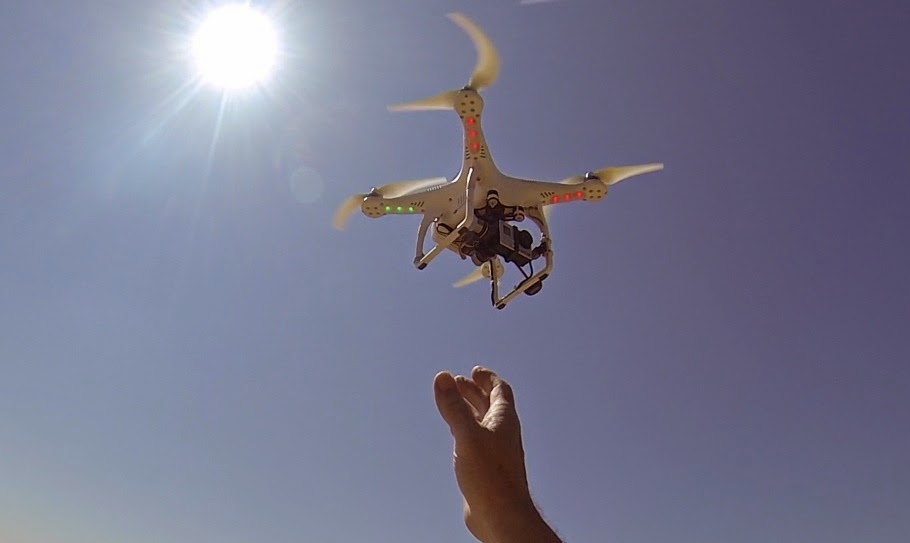 Los Angeles, CA—If you’re a cop in or near the City of Angels, Tom Zebra may just get in your face and under your skin.
In the age of the cell phone camera explosion came body cams and the ever-popular GoPros.
With the new technology police have been placed under the intrusive and unblinking eyes of millions of cameras.  A large percentage of them are in the hands of genuine antagonists like Zebra .
The next generation of police monitoring devices is here in the form of multi-rotor camera drones.  They can be quietly deployed over any police action.  They can record video of anything taking place in plain view under the skies.
Cops have been understandably hostile to these cameras and nationwide thousands of bogus arrests have been made of people recording them.  Cops have confiscated cell phones, cameras and their media storage cards.  Cops felt they should have a right to privacy but the courts have spoken.  They have no such right.
Lawmakers at local levels have been sympathetic to the cop’s concerns and have unsucessfully tried to make end runs around the law that would inhibit or end the public’s rights to record police.
There is yet another side to the police/camera issues and that’s the amazing fact that the captured videos vindicate the cops well over 99% of the time.  Slowly cops are beginning to realize that these cameras and much more objective than the people using them!
Targeting cops from both land and now the air is Tom Zebra.  Zebra is a citizen journalist/provocateur.  He points his cameras where they are not wanted in various police matters.
Zabra garnered additional cop hostility by flying his camera drone over a walled-in police parking lot.  The cops came out and actually threatened to arrest Zebra for trespassing even though he never set for inside the police parking area.  Zebra got his video and wasted no time posting it on YouTube.
Police recently San Pedro Port police arrested Zebra and confiscated his drone as evidence.  Ironically Zebra was not photographing police, but a U.S. Naval vessel that the public was invited to both visit and photograph. Zebra’s crime was the apparent violation of a L.A. park’s ordinance.
The little known existing law banned the use of remote controlled model aircraft in parks, beaches, horse trials or any place not specifically designated for them.
I’m convinced that the law was drafted to target noisy fixed wing model aircraft that frightened horses posed a danger because of their speed.
One of my legal experts believes that Zebra has a first Amendment right to use his drone camera despite the L.A. Parks ordinance.  Zebra has a right to take photos.  My expert said that collecting the legislative history of the remote control ban showing it was never intended to cover the much quieter and slower moving multi-rotor camera drones would help Zebra in court.
In the meantime to the cop's chagrin Zebra’s not grounded, he apparently obtained a new drone and is back in business.
Last but not least, are the thousands of people nationwide that have camera drones.   They are holding their breaths, waiting for lawmakers and the FAA determine the future this new and exciting industry.
The majority of the camera drone operators I talk with are hostile to Zebra and his militancy.  They say he’s going to ruin it for everyone.  I say that idea is dead wrong.  If anything Zebra is making it better by taking the lead in challenging government tyranny.
Someone will have to test bad laws or unreasonable enforcement.  Frankly I’d rather stand behind Zebra rather than in front of him in that regard.  We can only learn what are rights really are by the Tom Zebra’s of our world willing to test the system.

He is not a provocateur. He is exercising his first amendment right to document public servants while on duty. The police who find him a nuisance are those worried about their actions. They get paid way too much to abuse citizens and violate constitutional rights all without consequence because the entire judicial system and corporate news media protects their unlawful behavior. The guilty don't want to be held accountable or proof of their misdeeds. Just as police like to say "if you're not hiding anything, then it won't be a problem if we search your vehicle (the real statement is then it won't be a problem if we violate your 4th amendment right to search and seize). BUT, the kicker is we as employers of these public servants, and permissible by our first amendment right, we are allowed to record their violations of our rights. Most of these cops don't even know the laws that they are supposed to be enforcing, and that is where they make their own laws -always ask them to cite the law they are enforcing -to get you to stop. They have this above the citizen mentality like they own us, when the reality is they work for you. Get that clear in your heads right now. You pay them to protect and serve. Not treat you like their slave. This is the problem. Know the law, know your rights and fight back.

Rights that are not exercised are rights lost. In order to maintain freedom in this country we must stand up for our rights.

Please see my videos and subscribe on youtube...mrtomzebra.
The comment in this story about video vindicating cops 99 percent of the time is flat out dishonest.
Yeah, cops dont like to be recorded because video proves their integrity.

Bye the way Zebra's drone piloting skills are very good and his videos are interesting. I want to see more of them. As for the cops they will have to adjust to this new technology. Cameras can be a good cop's best friend.