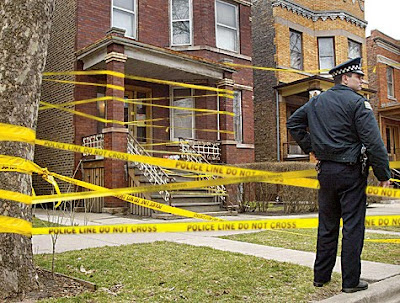 Chicago, IL—The murder rate has soared in Chicago as African-Americans rage on each other and White people. In nearly every incident the offenders are Black. There are a few Hispanics killing but White people are rarely a part of the Windy City’s violence other than as victims. This is a deadly public health issue every bit as bad as the plague.

Leftist government officials once again tinkered with failed social experiments by dismantling the vertical ghettos like the Cabrini Green and Robert Taylor housing projects. They sent these inhabitants out to the suburbs by the thousands and to all White neighborhoods like Chicago’s Northwest side. Crimes especially murder are exploding everywhere these African-Americans have been placed.

The reason for the increase in violence is a simply a flawed culture not some genetic trait. However, it’s the tolerance for the unique African-American culture of ignorance, hate and violence that fuels the crime. It destroys lives of both the perpetrators and the victims.

Blacks are encouraged not to fit into an integrated society by maintaining a warped value system. It begins with fostering ignorance with their pathetic language, Ebonics. Every third word they use is profane and insulting such as their favorite term, mother fucker. Theft is a way of life along with massive indiscriminate breeding. Traditional American values and standards of conduct are not part of Chicago’s African-American society. Blacks are enabled, encouraged and invited not to conform to the ways of a peaceful productive society.

The news media has done everything possible to cover up the fallout from the Black community. However in recent years there has been an explosion of cheap quality video cameras and every night Black faces of violence are broadcast into Chicago’s homes during the dinner hour.

They’ve tried to blame guns for the culture of murder but the White inhabitants own significantly more firearms and are not turned into killing machines because they own guns. It’s the bankrupt culture, and the tolerance of it that’s the real problem.

Young Black men treat being arrested and pushed through the criminal justice system like White people treat diplomas and scholastic honors. Being sent to jail is somehow considered a bold accomplishment. Rather than being a social stigma a felony conviction is a right of manhood in the African-America big city culture.

Culture tolerance is the new genocide and it’s practiced to the absolute detriment of Chicago’s Blacks and their miserable way of life.

The culture must be shunned, blacklisted and punished or it will continue degenerate in ugliness and misery. Responsible government officials need to de-glamorize bad behavior and begin to do something unheard of in Chicago’s schools. Simply be teaching children that by some conformance, simple manners and embracing education they can gain wealth and actually live the American dream.

Until we attack the rabid, violent and destructive Black culture we will never succeed in bringing kindness, productivity or enjoyment to African-Americans. Frankly they don’t deserve the flawed social programing the political Left has created for them. That programing has been racist and inherently evil.
Posted by Paul Huebl Crimefile News at 4/13/2012 05:37:00 AM

The reverends have spent the last 45 years teaching their flocks to reject the Judeo-Christian work ethic that has made mainstream society productive and prosperous.

The Jacksons, Sharptons, Farakhans, among others, have kneecapped their fellow blacks so that they don't stand a chance in hell of succeeding.

Tragically true! The enslavement and entitlement mentality has gotten much worse under Obama.

Give a man a fish and he eats for a day. Give a man a welfare check, a free cell phone with free monthly minutes, food stamps, section 8 housing, a forty ounce malt liquor, a crack pipe and some Air Jordan's and he votes Democrat for a lifetime.

I'm going to forward the link to this essay to several other political sites I post on. The Truth needs to get there, now more than ever.

You article is speaking about a very small population located in the inter-city of Chicago. It does not refer to the entire black community, but you article paints the entire black culture as violent. It is not. This isn’t the normal for the black community. Yes, there are some black young men who view violence, drugs and jail as a way of life but there are Millions, upon Millions that get up go to work, and school every day peacefully. Enjoying all that is American. You sir are only addressing the illness of a few thousand. Don’t dare represent this as the normal for the black community. The violence is a sickness all it own an not everyone living there is infected. Those people are trapped there living in fear. No one video tapes people just going about there peaceful every day life only scenes of violence and ugly behavior make the news and the internet. The video is then used to paint an whole races of people as violent and un civil.

While I know that what you say is true, I think the problem is the same one that the Muslim community is facing today, and that is that you don't hear anything from the Muslim leaders condemning terrorist acts, just as you don't hear from the black leaders about violence in their community UNLESS the offender is white and the victim is black as in the Treyvon Martin case. Black children are killed every day in Chicago and no one says a word. The Race baiters like Sharpton and Jackson are doing your community a disservice, along with the racists from the New Black Panther Party. It's time for decent blacks to stand up and help solve some of the problems in black culture, and I think the most effective way to start would be to start voting Republican so that you can get out from the Democrat entitlement noose.

I know many many black people and I call them friends. I agree with the posting of 10:30 am to a degree.

Most of us can identify the reckless useless individuals Paul speaks of, but like the militant Muslims, the problem is not the idiots as much as the SILENT MAJORITY who stand by and allow the idiots and goofs to rant on and on.

You article is speaking about a very small population located in the inter-city of Chicago. It does not refer to the entire black community, but you article paints the entire black culture as violent. It is not. This isn’t the normal for the black community. Yes, there are some black young men who view violence, drugs and jail as a way of life but there are Millions, upon Millions that get up go to work, and school every day peacefully.

No, you see this wherever blacks come together. Chicago, Detroit, Atlanta, etc. You see this wherever slums have been torn down and the blacks sent to live in section 8 housing. Their behavior follows them and it wasn't totally due to their environment (no change in behavior once they are removed from the slums). Let's say for a minute that black make up 12% of the US population so that is about 36,000,000 blacks in the US. Let's say that of that number 5% are hard core career criminals. That is 1,800,000 people. Let's also say that the other 95% either live in fear or are accepting of the career criminals living in their midst (stitches for snitches). A minority of a minority drags down everyone associated with it. Get rid of the career criminals by turning over evidence to the police. Begin ostracizing the criminal element. No sanctuary or rest for you might be a good start.

If black behaviour were not genetic, how do you explain the same delinquent behaviour in haiti, and thousands of miles away in africa.

The very problems you mention as particular problems in black culture happen here in south africa.

They glorify thug culture, if that weren't genetic, how can 2 populations thousands of miles apart do the exact same thing.

They create slums where ever they go, and slowly the slum spreads

A guy in Illinois said...

Hey paul... yet a white guy walking traveling through chicago gets pinched for a AUUW because he had a weapon in his bags under the bus!
http://www.chicagotribune.com/news/local/breaking/chi-nevada-man-arrested-after-telling-greyhound-security-he-did-have-weapons-20120415,0,5025257.story

We are to blame.

My ancestors, prior to Judeo-Christian influence, were as bad as the Negro race in Africa, which canabalized and sold their own to slave traders.

The brain was not taught "thou shalt not" and empathy, therefore, there was little early stimulation in these parts of the brain. This is why it takes generations to see improvement.

Even a child today, who may be born to genetically inferior people can be read to, very young, and have the brain stimulated to better growth. Playing complex classical music, for example, can help the brain grow.

It is not racism, but a malady that has impacted all races, yet where "Western" thought, that is Judeo Christian beliefs, have settled, there has been less violence, and better civilization development.

Giving anyone, black or white, money for nothing, is a poison to the soul. It robs men of their manhood, which then must be "proven" in conquest of women.

Our government practices racism in its push for abortion and welfare, enslaving a people that should have advanced more so.

We showed the world that we were not racist by electing Barak Obama and we now see the folly.

We are ready for a good leader, regardless of color. We are more divided than ever under Obama, who has torn us apart, had no respect for the rule of law, and has pushed all things Islam (static religion) down our collective throat.

God help us. It is why blacks despise him. He infers that they are an inferior race in need of the government, yet says nothing to the Asians who work 12 hours a day to succeed in America.

His hatred of Judeo-Christian thought and his embrace for Marxism is no longer whispered or hinted at, as it was before the 2nd election. He is out of the closet.

I believe it is genetic. Haiti, Africa and their descendants. Studies are squashed as "racist" until the study says "African descendants are superior in sports" or something positive.

I believe over generations that genetics change, and with this, the culture changes.

America was the best landing place for Africans, who's lives under slavery were better than what was discoverd i Africa. Their descendants are richer than those in Africa today.

We, the liberals, are the racists, who tell today's black male that he cannot improve himself; he needs the government.

We, the liberals, then condemn the conservatives as racists when they say "if a man will not work, neither shall he eat" and try to give him a fishing pole rather than a free fish.

It is backwards. Thank you for an interesting article.