Movie Theaters are Disappearing at an Alarming Rate 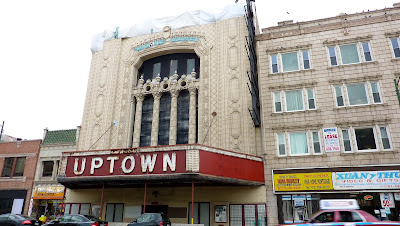 Chicago, IL—As a child of the 1950’s I can tell you about seeing a first run motion picture at a great theater. People watched the newspapers for word of a new blockbuster coming to the silver screen. The planned a special date that might include a dinner out.

Chicago’s downtown theaters were spectacular, the popping sound and smell of fresh popped popcorn filled the air. There was plush carpeting, comfortable seats and a huge screen with huge curtains that opened and closed.

Pretty, well-dressed young women occupied the ticket windows. Young men wearing formal suits with red jackets were the ushers. The ushers had small brooms and shinny brass dustpans. They ran around looking for any fallen popcorn and swept it up instantly. They were constantly moving those red velvet ropes to usher people into the theater in an orderly fashion.

The moviegoers were always dressed to the nines. They were well behaved, friendly and always smiling. Everyone at the theater had a grand experience. The films of that era were terrific. I can remember being a sixth grader going to see the film Ben Hur, with Charlton Heston at the Michael Todd Theater. For me that was a special night indeed.

That era changed and things were never the same.

In the 1960s, Chicago became the host of a huge migration of African-Americans seeking substantially higher welfare rates provided by the large Northern cities. The U.S. Supreme Court ruled the one-year residency requirements before even applying for welfare were somehow unlawful. The rush for the free money was in full swing. Southern states paid for one-way bus transportation to rid themselves of these poor, ignorant, dependent Blacks.

Chicago’s downtown area became overrun with these new migrants. Ugly behavior and crime skyrocketed. Chicago’s loop became an area to avoid. Any activity at the theaters involved a crew of off duty cops hired to aggressively deal with troublemakers.

By 1970 I had a part-time security gig at Continental Trailways bus depot. If I needed assistance the off duty cops working security at the nearby Chicago or State and Lake Theaters would come to my aid and of course I had to assist them at times. Purse snatching and sexual battery were incredibly common crimes. The crime was always Black on White or Black on Black. White criminals were never found downtown.

Over the decades White taxpayers fled the city in droves and the entitlement collecting Black population procreated faster than rabbits. Chicago is bankrupt and is showing no signs of recovery today.

Challenges to running a movie theater have not improved over the last five decades. Now theaters are shuttering their doors at an alarming rate.

Today parking cars in large cities is incredibly expensive and not without blame are those extortionate local taxes. The theaters are dark, dingy and poorly staffed. Many of the patrons are dressed down and often have offensive odors. Going to the movie theater has lost its luster.

Today everyone can afford a large flat screen TV with a terrific sound system. The Blu-Ray DVD experience is amazing. Why would anyone waste gasoline, parking expense and subject him or herself to street crime just to see a film?

Theaters have jacked up the prices of popcorn, candy and drinks comparable with meals in restaurants. That was a counter-productive move for sure.

That brings up yet another issue. Racketeering, and Restraint of Trade is rampant in the film industry. The nation’s film screens were limited and they were forced to show what studios demanded and for time periods dictated to the theater owners. Failure to obey would result in not getting any first-run films.

Independent filmmakers are finally getting a level playing field. The cost associated with the equipment to make movies has plummeted as the technology of the equipment has improved dramatically. Filmmaking will be more about art and less about clout and power. Anyone can sell their DVD’s to Wal-Mart or distribute them through Amazon.com.

With the death of the movie house and the reality of the home theater film distribution must change dramatically. All films are now promoted sold, streamed over the Internet or rented. Yes, Hollywood’s mafia is still trying everything possible to keep distribution under their thumbs. They are trying novel ideas like serving dinner with a movie. That experiment has failed because you can’t compete with home cooking and those home theaters.

The winner of this shakeout, are consumers, filmmakers and those supplying content to home theaters.

Some of the best local theaters in America can be found in L.A.’s Westwood Village. How long will they remain open? There were seven and now there are just three left.

Have you been to any theatres in a big city lately? It's truly a waste of money. Inner city shitbirds hooting and hollaring at the movie screen, cell phones ringing left and right, people acting like ignorant asses...

You are going to see a lot of places that normally caters to large groups of the public closing down. We can't have large public gathering places when we have groups of thugs looking to beat, rob or attack the regular public.

We are on a road to doom...and I think we are past the point of no return.

All the more reason to stay home watch a movie on your own big screen TV. Why go to a movie theater in downtown Chicago where you're going to possibly windup effing to shoot some ?

Southern states paid for one-way bus transportation to rid themselves of these poor, ignorant, dependent Blacks.

YOU GAVE THEM RIGHTS NOW YOU CAN LIVE WITH THEM.

The theaters in Westwood were great. I went to the Starbuck's by the Fox and stumbled upon the premiere of "Rules of Engagement" and got to speak to Tommy Lee Jones. Great theater! Been a while since I've been back.

In Alabama, I ONLY attend a theater that is restricted to 21 and over, and serves drinks and real food...well, nachos, sushi, burgers...as well as the standard movie fare.

And as far as the bus ride thing...we used to have a practice in Florida where we would transport a "no-account" north to the country line, where we'd meet a deputy from the adjoining county, who would repeat the process. We figure we sent a bunch of them to Georgia. I guess they bought the bus tickets for them afterwards...

Anyway, the northerners got revenge on us for sending themselves to Florida and trying to turn it into South New Jersey or something equally revolting. I guess karma is a bitch.

I "heart" the chick in the white hot pants. Wow!

I hope ALL these Communist -Junkie, No-Nothing, Hypocrite Actors and Actresses in Hollywierd go completely broke, and their trade disappears completely. Their Garbage-laden Morally bankrupt films will soon evoke the Wrath of God.

Along with what Shaved posted first is the fact of why do I want to spend $9 to walk in the door then $9 for a drink and popcorn? Add in my date for another $9 and another drink and we are talking $32 to watch a movie. Just told my wife last night about how many trailers I have seen and said I have to see that movie but it either never seems to arrive at a theater or when it does I figure I could wait to watch it at home. I choose to see only those that benefit from a big screen, and that isn't very many.