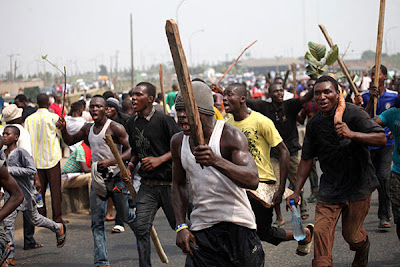 Chicago, IL—As the Windy City residents prepare for a long, hot and violent summer the Chicago Police Department will be unable to keep the peace. Currently as the thermometer goes over 60 degrees African-American neighborhoods become war zones.

Wait until summer. The new African-American craze to create flash thug mobs to overwhelm and rob business can’t be stopped by the meager amount of cops patrolling city streets. Each incident will only empower these criminals more until they are stopped dead.

Chicagoans need to be trained, armed and ready to fight for their lives because 911 calls won’t bring a meaningful response. The mayor and police administration only knows this too well.

There is a greater amount of racial divide in this nation than since the Civil War. That’s been all brought on by, Communists in the Obama Administration and a racist Attorney General. Obama’s minions are itching for a chance to take absolute control of this nation and all of its assets.

The gun stores are nearly sold out of guns and ammunition and the manufacturers are working night and day to fill the orders.

Obama’s Homeland Security Department has just ordered 450 million rounds of ammunition. That revelation has sent a clear message to many Americans that Barack Obama is planning something unthinkable in what used to be a free society.

This can be stopped only by a swift, sure and determined defense. I see little way around the dark days ahead. Everyone will need to stockpile food, water, batteries, ammunition, family service, walkie -talkie, ham radios and medical supplies. Power, the Internet and cell phones will be shut down. Generators and fuel will be coveted.

Cooperating with government under these conditions will be suicidal. Resist, resist and resist some more.
Posted by Paul Huebl Crimefile News at 4/11/2012 02:44:00 PM

If confronted by a mob like that in your picture, I would be very scared.....that my barrel would overheat.

Thank you for all of the advice that you provide in your blog. I regard myself as fairly well-informed, but your experience has given me some new insights.

Paul, have you considered coming home this summer and doing some good- will work? A short documentary about the flash mobs downtown and at the beach. Something very short and well edited that would go viral on the web. Your qualifications could render something of higher quality than the usual YouTube crap. Something professional, without too much overt racial comentary might even captivate the libtards, moderates, fence sitters and others, who are In denial of the damage a certain segment of society is inflicting on the well behaved, obedient, citizenry. A picture is worth a thousand words. What's a motion picture worth.

Actually I would really love such a project of spending two months covering flash mobs and black on white crime in Chicago along with interviewing the victims along with going to the scene grabbing surveillance videos.

I seriously doubt that I would get any serious cooperation from the Chicago Police Department considering who has political control over it. That's okay because I know I could rely on individual officers quietly giving me some of the things that I need like names and addresses.

This would cost in the area of about $10 to $15 grand to produce, but it would be a labor of love and it would certainly be interesting and I would like to get the documentary distributed beyond YouTube.

I go visit father Pfleger to get his take on it. I'm sure he would have something ridiculous and inflammatory to say as usual. My last stop would-be at the mayor's office.

I would have to have someone or some group fund this to make it possible.

Thanks for the reminder. I need to order more ammo from Cheaperthandirt.com.