From My Dead Cold Hands! I don’t think so. 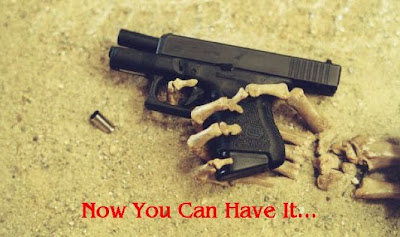 Washington, DC—We’ve all heard that rallying cry about gun rights. What would happen if federal, state or local government agencies came to our doors demanding entry for gun confiscation purposes?

History is the teacher here, and it tells us universally that people won’t put up a fight. They will simply capitulate under threat of physical force or arrest.

The keeping and bearing of arms in constitutionally protected activity but those are mere words on paper that are routinely ignored at every level of government. People are usually too intimidated to initiate resistance. They won’t fight for their neighbors being unlawfully disarmed and they certainly won’t fight for themselves.

The most recent example of gun confiscation tyranny was in the aftermath of Hurricane Katrina in New Orleans and surrounding communities. Incredibly California supplied their highway patrol officers to Louisiana officials for the express purpose of kicking down doors and confiscating guns without warrants. They looted thousands of guns from law-abiding people.

Instead of people resisting they instead turned over their valuable firearms to never see them again. They complained to deaf ears but not a single public official was penalized for this outrage.

In addition to the massive government tyranny those victimized were left defenseless at a time where roving gangs of violent looters were taking advantage of this disaster.

I visit a lot of gun shows and gun shops all over the nation and the braggarts that use the phrase, “From my dead cold hands!” are everywhere. I’m not suggesting that a tiny percentage of gun owners would not resist, it’s just not the experience.

I have advice for gun owners. Keep a low profile and don’t keep your firearms all one place. Most Americans are not equipped to put up a fight anyway. Government agents will always be well armed and freely use and abuse gas and explosives to make entry to homes. They will kill you and your family if you resist.

I expect that terrible day is coming and few Americans have a plan. Cell phones and the Internet will be shut down reducing any ability to summon help to overcome the resistance. Maybe it’s time to develop a plan for resistance and the common defense.
Posted by Paul Huebl Crimefile News at 4/24/2012 10:55:00 PM

a Government that disarms its Law Abiding Taxpaying citizens, in time of need, is truly a Totalitarian Regime and not the Government of a Free Society. Shades of Nazi Germany.

Cops are not well trained across the county.Most are political hires or affirmative action types,low quality.
They are there for the easy gig,pension and other perks of the magic button kingdom.Not warriors.

The mighty(giggle)CPD only shoots once a year,30 rounds and thats it for the average cop.

Most SWAT teams are highly overrated and not set up for prolonged seiges or true active shooters.They are normally made up of golden boys and political types.Very few are the real deal.

CF:the line in the sand hasnt been crossed yet,yet.People will take alot of abuse and hardship,loss before unleashing the horsemen.