Self-Defense Shooting and Your Choice of Ammunition. 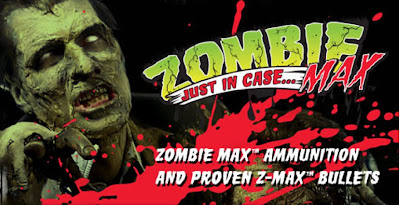 Phoenix, AZ—I went to my favorite gun dealer in Arizona, Legendary Guns to purchase some new ammunition for my primary protection.

I asked Paul the salesman who I have known for over two decades, for some decent hollow-point ammunition. Paul asked me with a smile if I wanted the “Zombie Killers”. I thought he was kidding me and I told him I needed them to stop vampires, werewolves and space aliens too!

He handed me a box of Zombie Max bullets! All I could think about is some prosecutor in a self-defense case telling some jury that the defendant had purchased and used bullets called, Zombie Killers. Yikes! I thought, but how will your lawyer explain this?

I looked carefully at the box and could see that it came from the very old and reliable Hornady Manufacturing Company. I looked at the specifications and what was important they matched what I wanted and the Zombie Max rounds did.

In any shooting you must think of public safety as well as your own. You need bullets that will use all of their energy inside your intended target and not cause injury or death to innocent bystanders.

Police agencies use hollow-point rounds for that very reason. It’s not critical that your assailants die but be quickly stopped from killing you and others. The reality is that over 60% of people shot survive anyway.

Should you be charged with a crime or be sued your defense lawyer needs to know exactly why you obtained the ammunition you used. The reality is hype is used to sell everything including ammunition. It’s the technical specifications rather than the name used to promote the product.

Take a look at the webpage and video promoting Zombie Max. http://www.hornady.com/ammunition/zombiemax
Posted by Paul Huebl Crimefile News at 3/10/2012 02:26:00 PM

Has Hornady lost their F*n Minds ???

Know is the time to stickup prior to November, ammo is moving and so are prices. There is a great fear zeroing America about this election z and the potential outcome either way it goes.

Ammo is plentiful outside of IL.

I recommend using the same ammunition for self-defense as a legally-armed citizen, as the Feds and Major big City Law Enforcement Agencies use, for an easily explained in court choice of ammunition, if you end up there after using your firearm in self defense, and your choice of ammo comes into question, which it probably will.

I believe the box specifically states "FOR USE ON ZOMBIES ONLY".
Which would relieve Hornady of any liability if you the gun owner , uses them improperly.
As we've all been told '2 to the body/ 1 to the head' does not work here. When it comes to zombies, 'Dbl tap head shots ONLY'