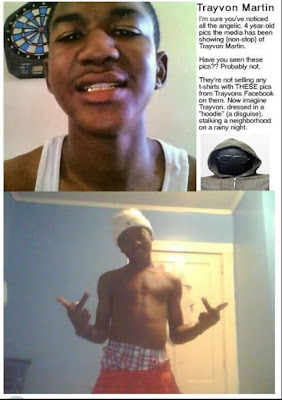 Chicago, IL --Not a week goes by in the Windy City without violent Black on White atrocities motivated by racial hatred. The stories are ignored because they’re deemed to inflammatory to publish. If they’re published at all, great pains are taken by the media to conceal the race of the offenders and victims.

However in those rare cases where it’s White on Black crime they exploit those stories for all they’re worth. The problem is most of them are just stories with few facts to back them up. Remember the infamous Tawana Brawley and Duke LaCrosse Players rape cases? How can we forget all the political posturing and race baiting surrounding those cases? How soon the prosecutions fell apart when they were discovered being motivated by, grand litigious self-enrichment plans.

The Florida self-defense shooting by George Zimmerman of that six foot tall football playing gangbanger, Trayvon Martin. Zimmerman, a Block Watch captain is the newest news fable. Zimmerman called the cops to report Martin’s suspicious behavior. At some point he found himself under the imposing 17 year-old being pummeled and bloodied. A shot was fire and Martin was killed.

The press ran with this story with the angelic picture of Martin when he was years younger and smaller. They told of him being armed only with iced tea and a bag of candy. They media never bothered to flush out witnesses that could shed light on the matter and there was at least one independent witness that clearly established a case of self-defense.

Race baiting by national media organizations is still at a fever pitch as they provide fee publicity to groups such as the New Black Panthers to gather large mobs in every major city. To me this is an intentional effort to start a race war. They even provoked a silly response from that dope in the Whitehouse.

George Zimmerman has a price on his head and I suspect that they will kill him before he faces either civil or criminal proceedings in court.

For now the media and the Obama Justice Department wants to make a Civil Rights hero out of Trayvon Martin. Perhaps they can erect a monument in Washington D.C. to their new icon. Perhaps they can use one of his Facebook pictures of him flashing gang signs while wearing baggy pants pulled below his underwear as a model.

Here is the original police report:

How come you are not mentioning that George Zimmerman is Hispanic?
The chicago wilding incidents not withstanding. What are some specific stories that the media are trying to coverup?

Do blacks get a free pass when it comes to threatening someone?

Why aren’t NBPP members arrested for threatening Zimmerman and putting up wanted posters?

Hey, thanks for posting a recent photo of the "victim". I am sick and tired of always seeing 9th grade graduation photos of mutts who get killed where they almost look like they should have a halo over their head. Nice to see what they look like nowadays. I'm still not sure of this case though. This idiot Zimmerman could have left the guy alone and made his 911 call. Better yet, he should have been home minding his own business and letting the cops do their job. Putting yourself in harms way as a volunteer is awfully stupid.

in Houston this weekend had 2 major deminstrations, both had Shela Jackson Lee, Al Green, & the local Quanel X insiting the crowd, just a ? of time & citys will burn.

To answer the question posted at 6:37, any serious crime in which the offender is black and the victim white. If there is any reporting of incidents like those, they are short and usually buried on page 46 or so. But you knew that. For a quick and well known example, take a look at all the black mobs that have been pillaging and plundering in major cities across this nation. If those incidents get reported at all, they are watered down and descibed in less violent terms and words like "wilding" are used. In reality they are nothing less than riots during which aggravated batteries and robberies are committed. But you knew that.

This is why the Feds call Hispanic WHITE, so there is no record of Hispanics causing crime. And the NBPP is getting ready to be BO's honor guard....

According to the narative, Martin was oon his way back from the 7-eleven. If that is the case, he would have been entering by the south east as that is the direction of the closest station. The call by Zimmerman was made from the north central part of the comples, and the attack happened in between those locations. That means Martin either was wandering about the community, or he back tracked Zimmerman when he attacked him.