An Eyewitness Speaks Out About Andrew Breitbart’s Death Scene. 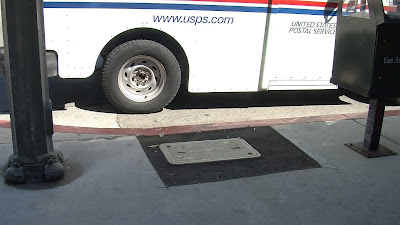 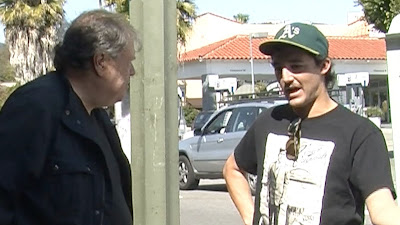 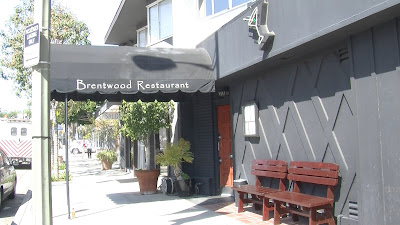 Los Angeles, CA—It was just after midnight when Christopher Lasseter was walking his little dog in Brentwood. He watched a man he now knows to be Andrew Breitbart crossing Barrington from The Brentwood.

Beritbart was walking without apparent distress in the direction of the Starbucks across the well-lit street. Once Breitbart stepped up on the curb, as Lasseter put it, “He fell hard like a sack of Potatoes.”

A man unknown to Lasseter called 911. The 911 operator told them to begin chest compressions on Beritbart until the police and paramedics arrived.

The very top photo shows where Breitbart died on his back with his head close to the lamp post on the left and his feet under the newspaper vending machine to the right.

I obtained the interview on video but it’s now property of TMZ.com so look for it over there. I will post a link here once it’s available.

We will be waiting with bated breath for the Medical Examiner's and the Toxicology Reports to know exactly what cut a young man's life short.


•The skin of a cyanide-poisoned person can sometimes be unusually pink or cherry-red because oxygen will stay in the blood and not get into the cells. The person may also breathe very fast and have either a very fast or very slow heartbeat. Sometimes the person's breath can smell like bitter almonds, though this can be difficult to detect.

That sounds exactly like cyanide or carbon monoxide poisoning. Except with CO poisoning, he'd have likely fallen unconscious and not been walking around. Good call.

Looks like ACORN pulled a Richard Leonard "The Iceman" Kuklinski.

Great work Paul. Stay on them.

Flushed skin can be a symptom of cocaine or other stimulant overdose. Rich Hollywood type -- not much of a stretch. We'll have to wait for toxicology on that one.

In any case, if the witness turns out to be reliable, we know it's not the widely speculated heart attack. In those cases, the victim turns pale, ashen, or even bluish.

Andrew Breitbart, angry rightwing alcoholic?
Was Andrew Breitbart perhaps a closet alcoholic or maybe out in the open wit his friends even? I mean why would a grown man with 4 kids and a lovely wife stop for a DRINK at 10 pm when you shoulda been home with wife and kids? And he was not meeting anyone there either. Sounds like he had a problem with alcohol and maybe other things, like drugs, if this was his MO. I plan to pursue this sidebar on a national level. AB died from heart attack sure, he had hearts problems. But did his anger and hatred and lifestyle of ME ME ME create the perfect story for his early departure from this mortal coil?

Dan, Breitbart didn't hate. Liberals who didn't know him, hated him. All he wanted to do was find the truth out about things and expose it.

What's wrong with going to have a drink at 10om? My husband sometimes stops into the bar. It's the only place to socialize around here.
Get a grip.
We know nothing about Andrew's personal life & it's just best to stop speculating such tripe until we know the truth.

Breitbart is on record as stating he had come into information that would be damming to Obama's reelection campaign. The odds of his untimely death coinciding with the release of catastrophic material regarding the president who just signed the NDAA is just too much. There is no such thing as immaculate coincidence.

I wonder if Andrew regularly visited that bar at that time. If he didn't, I would think poisoning would have been very difficult.

Wonder if they checked if the regular bartender was working there or if they asked for the empty wine bottles for analyzing.

YOU SHOULD OF KEPT THE TAPE!!! BECAUSE TMZ BOUGHT IT, TO MAKE SURE THIS CASE, NEVER GETS INVESTIGATED!! TO CENSOR IT!! TO KEEP ANY NEWS OF INVESTIGATION OUT OF THE PRESS!! TO CONTROL THE DATA!! COMPLETE NEAR WHITEWASH OF SEARCHES ON BREIBART IN GOOGLE, NO INFO. NO REPORTING!
YOU NEED TO FOLLOW UP, ON THIS COVER UP!!! HARVEY SCREWED YOU!! AND, BREITBART!!! FIND OUT WHY HARVEYS HOLDING THIS BACK!! DEMAND HE RELEASE IT!!

BTW-YOU DID AN EXCELLENT JOB!! NOBODY REPORTED THIS!! THEY ARE INTENTIONALLY -NOT- AND, HARV WILL HOLD THAT TAPE FOREVER!! THIS IS OUTRAGEOUS!!
DO NOT LET HIM TAKE CREDIT FOR YOUR WORK!! BUT, SEEMS HE BOUGHT THE TAPE, TO SHELVE IT!!
WHY??? AND, FOR WHO??

For the record, TMZ was fair with me for sure. Harvey Levin is perhaps a Liberal but he’s fair and I trust him implicitly to do business with anytime.

With respect to the witness I interviewed he simply can be located and re-interviewed anytime. There are also police reports and material in possession of the medical examiner.

Let’s hope the medical examiner and toxicologist are on the square. We will have to wait and see.

WE SHALL SEE.. HE COVERS EVERY SKANK IN HOLLYWOOD, BUT DIDN'T EVEN COVER BREITBARTS FUNERAL?? TOTAL 1 ENTRY IN ALL TMZ NEWS, ABOUT HIM. 20, 000 FOR SNOOKIE?? -SEEMS MORE THAN, SUSPICIOUS.. WOULDN'T BE THE FIRST TIME!!
BUT, IN ANY CASE YOU ARE A FINE INVESTIGATOR. DOUBTFUL BREITBARTS OWN STAFF, WAS AWARE OF THIS REPORT!! YOU ARE THE ONLY ONE THAT BOTHERED. THANK YOU.

I'D REMIND YOU ALSO.. WITHOUT THE WITNESS REPORT ON BREITBARTS WEIRD RED SKIN.. AT COLLAPSE, THE CORONOR, HAS LESS TO GO ON, NOT KNOWING THAT. IT COULD BE THE ONLY CLUE, TMZ HAD NO RIGHT, TO HOLD ON TO TAPE WITHOUT RELEASING AT LEAST THAT EVIDENCE, TO POLICE, & CORONOR.

You are the 'Citizen Journalist' Andrew talked about! Keep it going!

"We are ALL Breitbart"

It would have to be a MASSIVE heart attack to give him no notice whatsoever that way. Sounds like he had no symptoms whatsoever and then just dropped dead. Sounds VERY fishy to me.

And watch the video of a whistleblower describing the CIA's high-speed HEART ATTACK GUN that shoots a poison-loaded dart into the intended victim.

The poison leaves the body quickly so that a delayed autopsy, like Breitbart's, cannot detect it!

After listening to the testimony, you will probably be convinced that Breitbart's red skin color resulted from poison shot from just such a gun.

Chemical composition of "Kolme" drops is carbimida cálcica. Mixed with alcohol, it can be lethal. Face turns bright red, head pounds, blood pressure can drop or soar. It is difficult to identify n body.

You also need to investigate Arthur Sando, the marketing executive who chatted up Breitbart, who was busy tweeting on his Blackberry, in the bar. Something's not right here.

Just to remind you...

Andrew Breitbart lay dead on top of a High Voltage Pull Box Access Cover Plate on the sidewalk next to Starbucks in Brentwood when the EMTs arrived and could not revive him. He had just left the Brentwood Restaurant where he had been sipping red wine, talking, and making calls on his Blackberry. He had just walked less than 100 feet across S. Barrington Avenue when he collapse as he stepped up onto the curb next to the entrance to Starbucks. A witness who was out walking his dog saw him collapse and another unidentified man called 911. The 911 operator instructed the the two witnesses to start heart compressions. They did so until the EMTs arrived and took over.

At the time and place where Breitbart fell he was 1.4 miles from his house in Westwood. He was walking in the opposite direction from his house toward the off-street parking next to the entrance of Starbucks. He was not walking his dog. As he lay on his back, his head was next to the base of the street light pole and his feet were extended under a newspaper vending machine. The position of his body indicated that he had slid down the street light pole as he fell. The Pull Box had recently been relocated and replaced with a larger Pull Box. The installation of the new Pull Box had not been completed but the tripping hazard was not blocked off or marked. There also was the possiblity of electric shock due to stray voltage from the Pull Box or the street light pole. Andrew breitbart collapsed on top of the High Volatge Street Lighting Pull Box. Did the Los Angeles Bureau of Streer Lighting inspect the scene to rule out electrocution caused by stray voltage? Did they investigate why there was no barrier or warning sign in place at the tripping hazard presented by the incomplete installation of the Pull Box?

TMZ has you video of the witness interview that they have never released. You have watched while a false narrative of Breitbart’s death was spread all over the internet. It’s past time to set the record straight. You could start by calling CAL/OSHA and asking if they inspected the death scene for stray voltage and tripping hazard. Believe me it was reported to them two weeks after AB’s death.

so, who is the other man (unknown to lasseter) who called 911 and "began chest compressions along w/lasseter?"

who and where is he and why has his name not been released?

I'm now on the case and so I will be doing those things that weren't done that I think is necessary to shed light on this mystery. Please give me a few days...

CIA (compound) poisoning to resemble a heart attack, first compound given at the dinner with Ayers second compound must be given within 30 days?

Andrew Breitbart(ABB) entered at 10pm & sat next to Arthur Sando, a Marketing executive. Is that a coincidence? I doubt it. Perhaps after ABB went around talking of how he had major news to hit on March 1st, this media executive, Arthur Sando set up a meeting with him there to discuss some future business. At the time ABB died he was in proces of refinanceing his business. So he would probably discuss possible opportunities. And as for the unidentified man that helped do cpr, well... considering that ABB was very controversial, surely some agency was watching his moves? Could that person have been the one doing CPR? For me I find it hard to believe he met this executive by "accident".

I'm curious why your second interview video of Christopher Lasseter did not include the sidewalk, the high-voltage street lighting pull box access cover plate or the newspaper vending machine in the field of view? Did someone prevent you from showing these features and the area of the sidewalk where Andrew Breitbart collapsed?

Lasseter and I both stood on the exact spot where Breitbart died for this video. Since I placed clear daylight pictures in the story I just felt it was unnecessary and redundant to reshoot the sidewalk with video. I may be returning there at night with yet another interview of another witness and perhaps I may shoot it again for a new story.