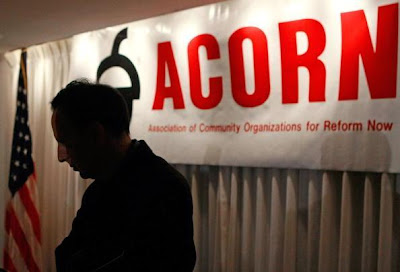 ACORN was mired in massive vote fraud shenanigans in their successful-win at any cost effort to elect Barack Obama.

ACORN wound up shuttering offices and quickly restructuring their assets.

The former community organizer, Barack Obama and ACORN were always joined at the hip. Obama is vital to ACORN’s survival.

Andrew Breitbart was reportedly only hours away from releasing embarrassing videotapes of Barack Obama. The timing of Breitbart’s death is beyond suspect.

That kind of money in the hands of the ACORN criminal enterprise can easily facilitate an assassination of nearly anyone. Breitbart had to be at the very top of their enemy list.

Now the political extreme Left in America is desperate as their Messiah has an approval rating far below that required for reelection.

ACORN has redundantly proven that they will resort to major felony crimes in the course of their business. What’s a little murder?

It was beyond laughable when authorities quickly branded Breitbart’s death as “natural causes” without an attending physician’s statement. Breitbart's body had not yet cooled before they passed judgment.

The LAPD and the Medical examiner must look carefully at the facts here and look for any signs of foul play.

There are drugs available to mimic more than one natural death. Some of those drugs escape detection of the normal toxicology examinations. ACORN has nearly limitless assets for their nefarious activities.

Americans must make sure that this death is properly investigated and cover-ups are not tolerated.
Posted by Paul Huebl Crimefile News at 3/02/2012 05:45:00 AM

Reminds me of a case many years ago when a young man was found face down on the third rail and the vodka-slurping duty detective burped once, briefly glimpsed the body, and pronounced it a suicide so he could get back to the bar. The coroner immediately closed the case. But the family hired a PI who, within 24 hours, located four witnesses who saw him thrown onto the EL tracks by three men who turned out to be co-workers he had reported for stealing. As you well know, it is easy to get away with murder, especially in a Democrat-controlled town run by incompetent political hacks.

Breitbart was murdered, but it will be swept away...

The same thought occurred to me. He was allegedly having drinks with someone, a perfect time to poison a drink. I hope his organization releases the dope they have on obongo.

•The skin of a cyanide-poisoned person can sometimes be unusually pink or cherry-red because oxygen will stay in the blood and not get into the cells. The person may also breathe very fast and have either a very fast or very slow heartbeat. Sometimes the person's breath can smell like bitter almonds, though this can be difficult to detect.

It wouldn't suprise me, but its too early to tell. I'd like to see the results of a tox screen. I agree that the nuts would stoop to this.