The Coming Obama Coup d'état and What to Expect 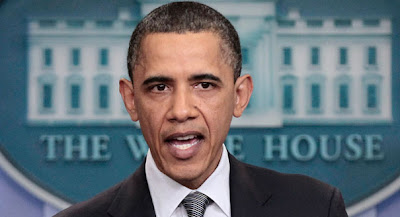 Washington, DC—Barack Obama gave himself the tools for absolute power and only a few folks blinked. He knows his ratings are in the toilet and getting worse by the second. Why would this dedicated Communist give up power when he has all the tools needed to maintain control?

Chicago will be ground zero for a major insurrection. Obama’s embedded government minions have done everything possible to make sure Chicago’s police are undermanned, outgunned and demoralized. The cops there will be unable to cope with any real civil disturbances.

Look for an Obama created national emergency that will be his excuse to:

1. Block all public access to the Internet and cell phones.
2. Suspend elections and the civil rights of Americans.
3. Take over control of the media.
4. Seize and control food and gasoline supplies.
5. Seize gun stores.
6. Detain potential resisters to Obama’s Provisional Government.
7. Rewarding supporters with new homes seized by the government.
8. War will be declared on any counter-revolutionary Americans.
9. Add millions of ignorant and unwashed thugs to Homeland Security ranks.
10. Obama will be received by the world as a gentle and benevolent dictator.

If resistance to Obama’s provisional government proves too strong, foreign troops will be invited from China and North Korea to aid in maintaining public safety.

Perhaps now is the time to add a ham radio to your survival kit. If you don’t have a survival kit you’re going to be in serious need.
Posted by Paul Huebl Crimefile News at 3/20/2012 10:03:00 AM

What makes this guy different from Hugo Chavez or Putin?

"from my cold, dead hands"[

What's with the moron coppers locking up Channel 5 reporters and telling them that their 1st Amendment Rights can be taken away???

This story made Drudge and makes us look horrible.

Why would you want the ensuing carnage to be hidden?

Why would you want the manpower crisis hidden?

Who's side are these coppers on?

Illinois had less than 24% turnout for the Presidential Primary. People are just sick of the BS system.

Maybe some parts of the world for number 10 but other countries just laugh at the Kenyan commie. Don't blame me I voted for Hitler.

What's with the moron coppers locking up Channel 5 reporters and telling them that their 1st Amendment Rights can be taken away???

This story made Drudge and makes us look horrible.

Why would you want the ensuing carnage to be hidden?

Why would you want the manpower crisis hidden?

Who's side are these coppers on?

hey, asshole, if you're going to try and spread your twisted opinion on the blogs linked from SCC, at least have the work ethic to compose a unique post, not just copy and past the same shit comment.

i understand this is how you do things at your overpaid position being employed by the msm, but here, on the blogs where thoughtful humans converse, your ignorance is blatantly obvious.

and stop using the word, 'we', douchebag.