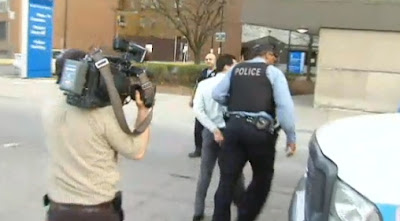 Chicago, IL—As far back as I can remember Chicago cops and local news reporters had conflicts. Cops relate to local media the same way they do the ACLU. Cops hate both until they need them. That in many cases is a dead wrong approach. Reporters seem to think cops are a bunch of poorly educated, heartless Neanderthals that hate everyone. They are also dead wrong.

There is a culture clash between professional journalists and cops. The vast majority of reporters come complete with the liberal brainwashing from their prestigious journalism schools. Nearly all of them support Left Wing politicians and that failed Socialist mentality. They seem to side with Chicago’s leftist politicians on every count. There are few exceptions.

Chicago’s finest on the other hand have learned the folly of Socialism deep in the city’s trenches. Cops see first hand the damage done by Socialists to human beings that are groomed to be ignorant dependents of a welfare state for life. The irreparable damage robs people of self-respect, morale and simple human kindness. Chicago’s poor live in a Socialist state that is nothing less than a serious form of democide and genocide.

Reporters don’t get the education cops get in the streets night after bloody night. Reporters never get to know the horror children are subjected to in the ghettos that turn them into hateful and violent drug addicted adults.

Reporter’s educations are a case of the blind led and taught by the blind. They don’t understand the abject failure of Socialism or Communism as a system of government. In a sterile classroom the Socialist theory seems like a good idea. The reality of Socialism is slavery, degradation and corruption on a grand scale.

Reporters are surprised to learn that a good percentage of cops have solid educations and at one time I remember when over 500 cops were also members in good standing with the Illinois State Bar.

Last week some TV news people found themselves in handcuffs when they got sideways with some cops. It was an ugly scene and a regrettable affair that got some national attention.

I’ve worked both sides of this fence and learned a lot over the past four decades about this cop/reporter culture clash.

Reporters are supposed to get their cop information anywhere they can. The department wants only one authorized information source; the Public Information Office for them to get it and it’s definitely not some street cop.

Street cops on the other hand never want to give reporters anything out of pure spite and department regulations. It’s in the best interest of every working cop to change this misunderstanding. Cops and reporters can work together for a better world.

The fact is cops and reporters should be a little smarter. If street cops will provide the information they can’t get from the department propaganda office they won’t be afraid lose the city administration’s affection. Reporters depend on the department for favoritism and it’s far better they rely on the street cop than some official disinformation officer.

Cops want and need reporters to tell the truth of what’s going on in the trenches. They need to expose how gun control laws do the exact opposite of what they were intended, the deadliness of manpower shortages and training deficiencies. The only way that works is when you make friends instead of foes.

Reporters and cops can do a lot for each other that will aid good public policy. They are far better off working together than separate.
Posted by Paul Huebl Crimefile News at 3/22/2012 08:18:00 AM

Yes and no. For every scene where a Reporter is there speaking to the people there are 10 where it's just a photog setting up and getting video for the talking heads to speak over. And the cops are just as ruthless in stomping on them as they are the reporters.
Not all cops certainly. But enough of them to make it a somewhat common occurrence. And the Photogs don't care who, what, when, where why. They're told by their desk to go to such and such a location and get video. They're directed monkeys with a job to do.
And there is no reason for the Cops to hassle them at all.

I consider a photographer as a reporter. The ones I know have all gone to the same schools as the reporters and producers. They are after all photo journalists.

CPD = being slowly brainwashed into a Socialist Country's style of policing. Chicago City Hall = the Kremlin

Most of the young CPD don't even realize that the rights that they are told to trample on by their Regime of Socialist Democrat Leaders will be the same rights that they one day will look for, and need, and will be gone.

"Reporters seem to think cops are a bunch of poorly educated, heartless Neanderthals that hate everyone."

After watching the video of this incident I have to think that sometimes the reporters are correct. This CPD copper was a total asshat!

Sorry all but this young reporter lead his crew into a hospital -private property- while trying to get his face time he got in the way of the hospital staff trying to do their jobs, then tried to go to a restricted area. He and his crew delayed their exit, the security guards tried to get them out. They didn't want to leave the private property and argued with the private security and the Police were called, he argued, would not leave and was arrested.

Ponce Jr should have known better,but maybe his daddy forgot to tell him the rules. Ponce Jr is the son of a TV reporter now employed at WTTW Chicago.

You make some good, solid points; however, the first time you're shafted by a reporter the relationship is tainted for eternity. I've been retired quite a few years and STILL don't trust them. They're like certain SAs...it will be career points with them if they can hang some cop's scalp on their belt.

I consider a photographer as a reporter. The ones I know have all gone to the same schools as the reporters and producers. They are after all photo journalists.

there are no journalists, photo or otherwise.

So next time a reporter is DUI let him go and let's all be friends. Reporters are not above the law when they are interfering or causing a disturbance.

I arrested celebrated TV news icon
Walter Jacobson for DUI, not once, but twice. On the second case, he plead guilty with a BAC of 0.09, after rendering his own car non-driveable, in 2008. Reporters are NOT above the law. If they commit a crime, they should be arrested. If WE, as police officers, commit a crime, the reporters demand that we be fired and sent to prison. What's good for us, is good for them!

There are exceptions to the rule and Walter Jacobson is absolutely incorrigible and deserves all the punishment that the Chicago Police Department membership can give him...

I like the idea of talking to the dept. rep when it comes to the media. I've had a number of contacts with reporters in my job performance and in quite a few instances had the information reported totally inaccurate.
They thrive in sensationalism and too many will knowingly distort the facts, for personal benefit. Unfortunately we also may have a few officers who'd do the same , but no where near the percentage as media personnel.
Also the biggest prick I ever dealt with on the job was a certain individual from CBS news , (who happened to be married to another blonde news reporter)who was involved in a hit/run, witnessed by me. I caught up with him several blocks from the scene and dragged his lying, whining ass back to the scene. Located the victim (teacher in school) and hung paper on him. One of my most pleasurable moments.
BTW, they can film all they want as long as they dont enter the scene or hinder the investigation.

saw where william Herens recently died in prison, was a little kid when he was caught,we lived 7300 south and the murder of the little girl was way way up north, mom r.i p nailed all the windows shut, old man had a fit,but a old time copper told me that the thing written in lipstick on the mirror of one of Herens victims was put there by a reporter of the old Herald American,reporters back then had carte blance open door to crime scenes and walked around like they owned it and knew all cops and bosses by 1st name and in some cases pocketed money, jewelery,and tottally contaminated the crime scene, next day cop got name in paper,btw he wrote catch me before i kill again.