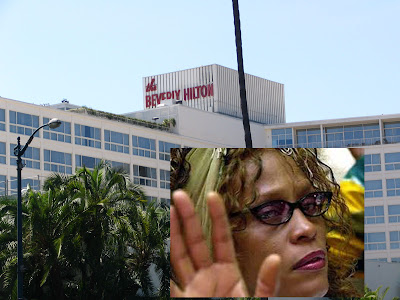 It’s a sad tale of an African-American woman who despite immense talent could not escape addiction to the deadly poison that obviously killed her.

Houston’s public behavior so-often lacked any of the dignity of her mellow voice. She was well beyond the point of humiliation.

Despite her music catalog’s incredible earnings Houston seemed barely a step ahead of the process servers and collection lawyers.

The last photos of her are pathetic. It shows an entourage of parasitic types holding her up. It looks like they were propping up their personal ATM.

The good news here is the courts will take control of her music’s future earnings for her only child. Most of her inner circle will now have to suck someone else’s blood for a change.

As for the War on Drugs, that was won against liberty, privacy, and has made all the wrong people hundreds of billions of dollars or more. Our politicians love that cash cow and will never let it go.

As for drug treatment, it’s only available to people who need it. They don’t want or need it for a cure but to reduce they time they’d otherwise be spending behind bars. Treatment needs to be reserved for only those that want to change their lives.

Every drug addict in America knows they can do whatever it takes to get the cash to purchase what no War on Drugs can stop.
Posted by Paul Huebl Crimefile News at 2/11/2012 07:06:00 PM

Whitney Houston was very very beautiful, gifted and had a very special and unique voice. Her singing voice at its peak was untouchable.

She was blessed with the voice of a Goddess, a very strong and proud woman at one time.

We all come into this world and must remember that...

We also may lack will power and a good brain in the end because of drugs and/or ill health.

a world which at times can be very grim

She gave to this world her soulful and beautiful heartfelt voice...

For a brief moment in time...

Let us remember Whitney Houston for that!

We will always love you Whitney...

Whitney started out as an extremely talented beautiful young lady, who was quickly pounced on by the buzzards of Hollywierd, and the Pop/Rap Perverts who are nothing but parasites. They talked their shit to her, got her on the dope, and forever ruined the rest of her life. RIP Whitney.. Your own people had a major hand in your slow killing by death from drugs.

Color and race is not what Whitney Houston's music was about. Whitney reached people no matter what color

The last comment stated, "RIP Whitney - Your own people had a major hand in your slow killing by death from drugs."

This is such a crock of shee...t. The issue is NOT RACE

Once again - not a race issue, an inner strength issue which needs to find safe harbor from bad drugs and rotten relationships - NO MATTER WHAT COLOR OR NATIONALITY YOU ARE.