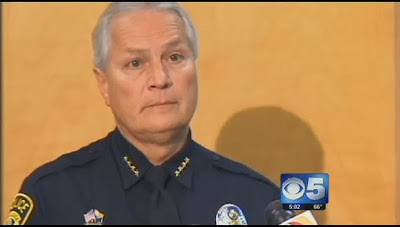 Town of Paradise Valley, AZ—I somehow thought the days of police mismanagement and deceit might be buried in this town's past. That was until I discovered that its current Chief of Police has misled the media.

With the shocking and sadistic home invasion murders of Glenna and Larry Shapiro I somehow mistakenly expected good things from this department that seemed smart enough to request investigative resources from outside the, 25 member department.

KPHO-TV CBS 5’s reporter Jason Berry asked Chief John Bennett about similar recent crimes in the community where home invasion robbers tied their victims up. Bennett proved to either be totally incompetent or he outright fibbed to reporters about two other such events in this town with some 14,000 residents.

Having three dangerous home invasions in this town reflects very badly upon the department. Apparently they’d rather tie up their cops extorting money from motorists passing through their over-regulated Lincoln Drive with robot cameras. Traffic enforcement is important but here revenue collection is more important than protecting the lives of their residents.

Bennett’s deception here is unforgivable and should not be tolerated by the people of that town.
Now I have to wonder if any arrests made in connection with the Shapiro case will tainted with perjury, evidence and witness tampering that this agency is well known for in past. Cops are expected to always tell the truth and in this town they failed redundantly for decades.

Perhaps it’s long past time to disband this department and contract with the Sherriff’s office or City of Phoenix for police services.

Watch the KPHO-TV CBS5 video below and see Chief John Bennett lie to everyone:

Paradise Valley police screw up any cases they get. They had an officer McFarland that cost that town millions over this falsifications and malicious acts.

This town has more lawsuits over police bungling than much larger towns. They have gotten caught framing innocent people and never seem to learn.

I remember that McFarland well. What a dope he was and those lawsuits he caused were incredible. He retired and is now working for the Cave Creek Marshall.

Never trust a police chief that wears four stars as their rank insignia. They somehow think they are General George S. Patton or something. For such a small town I would be embarrassed wearing anything higher than full bird colonel insignia.

Why haven't they annouced it yet?

It appears the suspects have evaporated...