They Executed a Prisoner In Arizona Today 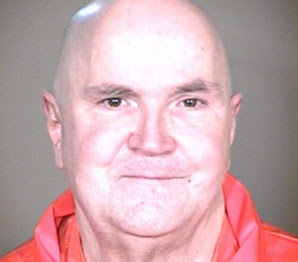 Florence, AZ—The small red brick Death House at the prison was the scene of a lethal injection execution today.

Robert Moormann, 63 was as defective and frightening as any killer went to his death asking for forgiveness. Moormann a Catholic made peace with God taking communion before he was killed.

The executioner used a single drug because the other two were unavailable. That will not be sitting well with the courts that warned they might intervene in this flawed process.

In 1972 Moormann, was convicted and given a sentence of nine years to life for kidnapping and sexually assaulting an eight year-old girl.

He was paroled and soon had his parole revoked. Incredibly officials allowed him to leave the prison in 1984 for 72 hours on a "compassionate furlough."

Mooremann spent that time at a motel across the street from the prison with his 74-year-old mother who was also his life-long sex partner. He apparently had an argument with his mother that ended when he beat, suffocated and dismembered her depositing her body parts in various places around the town.

Yes Moorman was a dangerous and twisted soul and deserved maximum punishment. He also reportedly had the mind of a child. Killing this pathetic creature nearly three decades later is beyond pointless.

He did apologize to the child he raped 40 years earlier and her family with his last words.

It would have saved the state a few million dollars in legal fees to simply kept him behind bars for whatever years he had left.
Posted by Paul Huebl Crimefile News at 2/29/2012 11:31:00 PM

I mostly agree, but life-in-prison doesn't necessarily mean that anymore. The only reason I support life over the death penalty is the cost of the appeals process.

There really is no such thing as "life in prison" Paul. You can pass such a law, but you have no control over future legislators. So today's life in prison could be amended to something else tomorrow.

I do agree though, we shouldn't be killing people. Solitary confinement with over the air tv, a basic am/fm radio and a library card would pass 8th amendment muster....I think.

The real value of the death penalty has been tremendously minimized by the decades between the crime and the execution. Judge Parker would convict them and hang them the next day or thereabouts. The impact of immediate, public executions on crime has been completely lost.