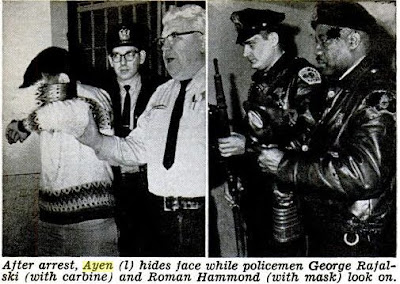 Chicago, IL—The first significant shooting in a school I can remember was in April of 1967 at Waller High School. Today that school is known as Lincoln Park High School

Donald Ayen was an 18 year-old White student in this school that had a 80% Black student body. It was the closest school to the notoriously violent Cabrini Green projects housing.

Ayen was routinely assaulted, robbed and threatened by the Black losers of this inner-city school. This was about Black on White hate and survival. The Blacks routinely brought handguns and knives to school and there were no countermeasures.

Ayen found the school turned a blind eye to his tormentors. There was no protection or meaningful school security. Ayen turned to self-help to deal with these criminals.

Ayers read about George Lincoln Rockwell and the American Nazi movement. He found comfort in their efforts to deal with the Negro threat. He also took steps to protect himself. Ayers planned to confront his dangerous enemies with superior firepower.

Ayers obtained a .30 caliber carbine, a can of surplus ammunition and a gas mask. He located parts for the trigger housing and converted the semi-automatic to fire at a fully automatic rate.

Ayen brought the carbine to school in an Archery box to conceal it. As usual the Black gang confronted him demanding money and Ayen displayed his carbine. The cowardly Black thugs retreated and suddenly school officials learned how to call police.

Police from the 018 District responded and cornered the frightened lad in the schools auditorium. The boy was holding his long coat with the gun and it dragged on the floor. Suddenly Ayen tripped on it and because his finger was on the trigger the gun let out an eight-round burst of fire. The bullets struck several empty seats and nobody was injured.

The shots were unintended but police took Ayen into custody and the media quickly crucified the lad. They simply labeled Ayen as the racist and never took care of security at Waller High School. Eventually every White kid finally fled from that cesspool.

The issue of Black hate and bulling of White Students was not something politically correct politicians or members of the media dare talk about. For Chicago, that was a huge mistake because not dealing with this only made things much more dangerous. The hateful Blacks were only emboldened by the inaction.

Did they ever attempt to bring one of Ayen’s tormentors to justice for armed robbery or those assault and battery crimes? Not a chance!

With modern school shootings degrees of bullying are always involved. The schools can’t or won’t deal with them.

That Columbine High School massacre was the product of bullying too. The two shooters were peculiar fellows that were singled out by classmates for ridicule. They responded with hate and extreme violence to the bullying.

I’m suggesting that the silliness of their Zero Tolerance for little pocketknives and such is not a solution or even a treatment for violence.

Schools have a dual responsibility. They must teach children and stop all bullying or intimidation cold whenever it happens. Teachers refuse to accept any duty other than teaching and that’s the real problem

Kids can and do experiment and resort to bullying because it part of growing up. We can either ignore this threat or deal with it. It’s not pocketknives that are the problem. Our kids must be taught at school that bullying is criminal activity that will result in swift justice.
Posted by Paul Huebl Crimefile News at 2/27/2012 09:00:00 AM

Paul -- you note that in that kinder, gentler era the police did not handcuff the kid.

I've noticed that in Phoenix the central police station was built with no first-floor windows, something a local cop told me was a reaction to riots around the country back in the late '60's. And police stations -- from the central one downtown to sub-stations in Scottsdale -- the doors are locked; the public must ring a bell and be screened by an attendant before possibly being admitted. And as you indicate, today it's typical to handcuff.

Segregation was, and still is, the only way to go. EVERYONE was much happier back before the failed Democrat Social Experiment of Integration came along.

re-Segregation Movement, needed now to save the American Way of Life..