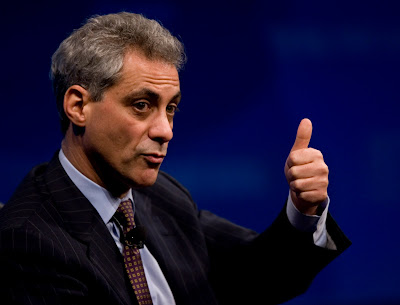 The mayor wants to reduce a Constitutional Right to a licensed privilege.

He claims this will somehow help police solve crimes. The suggestion that this will reduce violence is not supported by any studies or experience within this or any other nation on earth.

I guess The mayor forgot the City of Chicago already has a gun registration program under a vigorous and very expensive challenges in federal court.

The misguided mayor does not know or have even a clue about the following facts:

1. Two US Supreme Court decisions specifically exempted felons from being prosecuted for failing to register a firearm. The requirement violates their rights against self-incrimination.

2. Firearms are simply not left at crime scenes unless a perpetrator is caught, wounded or killed. Tracing such a gun is always worthless to investigators. Gun traces simply never result in arrests or prosecutions.

3. Yet another government bureaucracy must be established. The Illinois State Police are so overloaded now they cannot process the FOID cards that register gun owners.

4. This information is a privacy invasion that historically ends in confiscation schemes in every despotic government.

5. This is just another salvo being fired by gun rights haters against the Constitution of the United States.

6. This is no different than a Poll Tax. Forcing people to pay in order to enjoy a right is dead wrong.

If you live in the State of Illinois call Mayor Emanuel at (312) 744-3300 and tell him how you feel about his latest effort. Then call your state representatives and Senator in Springfield.
Posted by Paul Huebl Crimefile News at 2/09/2012 02:42:00 PM

The only people that "register" their handguns are honest, law abiding folks who don't commit crimes. These useless laws only serve to keep the honest people honest. It's the criminal element that obtains firearms and uses them with impunity. This objective leaves only the law abiding citizens unarmed and unable to defend themselves.
Does Hizzoner actually believe this will 'deter' gun ownership? That it will lower the violent crime rate involving firearms?
Why does Illinois have one of the highest crime rates in the nation? Ask yourself those questions and then try to take away my Constitutional right to own or possess a firearm!

Unconstitutional, just another money-grabbing, gun - grabing scheme by the Democommunist Politicians of Chicago/Crook County. It is their failure for the ever too high crime rates in Chicagoland, not an inademite object like a gun. Just another excuse for their abysmal failure for decades, and their failure to tell the truth about what the real problem is, because they created the real problem via Generations of Welfare.

Rahm is an idiot.

Rahm Emanuel is a Jew, don't he know what gun control did to the Jews in Hitler's Germany?

When a private sale of a firearm takes place in Illinois the seller is already required to keep a record of the transaction for 10 years. When a firearm is purchased new through a dealer that firearm can be reverse traced from the manufacturer already. The tools for law enforcement are currently in effect. This is just adding on fees to make firearm ownership that much more difficult. If I'm poor and living in Chicago, I need a FOID, then I need 5 hours of instruction so I can pay a fee for a Chicago Firearms Permit, then there is the cost of ammunition and the firearm, then Chicago's own registration scheme and its fees and renewals, now add on another level of obstacle and its fees. Why are there illegal guns in Chicago? Because the politicians make it all but impossible to do otherwise. Once you do jump through these hoops it is technically impossible to ever take that firearm out of your home to practice as the city requires it to be cased, broken down into a non-functioning state AND not immediately accessible. Those rules apply in your own yard, your from porch and even your attached garage... heck, you really couldn't even bring it home when you purchased it... compare this to Vermont or Arizona, two states with much lower crime where you can buy a firearm and carry it loaded on your person where it is useful for defense of yourself and family without any of the restrictions above...

Let's not forget that Rahm was hooked at the hip with Obama, his Chief of Staff and Chicago homeboys.
Already in the hopper in Illinois are pieces of pending legislation that concern themselves with banning guns in Chicago and the entire state. HB1294, HB1599. Could it be that Rahm is doing a test run for banning guns nation wide if Obama is re-elected? Chicago's problem isn't law abiding citizens, it's drugs and gang bangers and the lack of leadership to deal with the problem. Folks in Illinois need to stand up against this little man.

CHICAGO WRITES BIG CHECK TO SAF . . . The Second Amendment Foundation received a check for $399,950 recently for recovery of legal fees expended in McDonald v. City of Chicago, the landmark Supreme Court case that struck down the city's ban on handgun ownership. The check, signed by Chicago Mayor Rahm Emanuel, is the largest the foundation has ever received, said SAF founder and Executive Vice President Alan Gottlieb. According to an Examiner.com news report, the funds will be directed into Moore v. Madigan, litigation that is challenging the constitutionality of Illinois state laws that prohibit the carrying of loaded firearms for personal protection.

What if at least one teacher in that school had a firearm ? What if the principal had one ? How many lives could have been saved. Certain places have signs up that you can not have a fire arm in your possession on that property. Law abiding people abide by the law. Criminals know there are no guns in that area make it easier on them to do what they want.

How does this prevent stolen firearms such as those used in Newton Conn. from being used in crimes? The guns used by Adam Lanza did not belong to him, they belonged to his mother whom he killed to obtain them.

The Mayor came into town with the idea of makeing Chicago not unlike the ex boss Obama is looking to do to the USA. Both are far from being the brightest bulbs in the chandelier and had no experiance in running anything but Their mouth.Same dribble...same results.

Let's remind Mr. Emanuel how his own crime ridden, out of control city is when it comes to gun control. He needs to sweep off his own doorstep before he sticks his member on the chopping block for the rest of us. He has no record but the worst one and let's see gun owners hand over their weapons across these United States. You wanna really see some violence ? This past week will be like a day at the beach compared. Again, find a way to stop the nutcases from flling through the cracks. Way too many people are dropping the ball. It even goes back to Patch Adams and the psycho in that movie used a knife, so get ready America to hand over all your cutlery !!!

I'm guessing he missed reading a history book about what happened to the Jews in Germany after Hitler disarmed his people.