Please Don’t Invite Me To The Super Bowl! 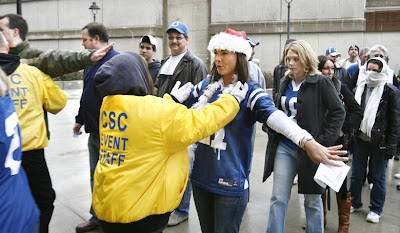 I resent lining up like a sheep for some jerk demanding I submit to a search like a criminal. I quit going to any event in any venue where people are required to waive their liberty and privacy.

The fact that the NFL can fill a stadium with people willing to submit to this form of Tyranny tells me that the American spirit and love for freedom is dead.

There are those morons that will sigh and say, “But now we live in different times with the terrorism…” To that I say hogwash! We went through a Civil War, World Wars I and II without accepting a Police State.

They’ve had terrorism, bombs and explosives throughout the history of the United States. I don’t object to vigilant security just stay out of my pockets! No metal detectors, body scans or X-Rays for me thank you!

Americans have been brainwashed into believing there is a need to jettison freedom and our hard won Bill of Rights. We need to stand up and reject this trend because it gets worse by the second. If the NFL was unable to sell or even give away tickets and the airlines began to fly empty planes everywhere we'd see our privacy and dignity returned.

I always refuse jury duty because they demand I volunteer for a search before I enter the courthouses. I send a quick letter saying I will serve but won’t submit to the frisking and always get excused.

It's such a paradox that the games always begin with the Star Spangled Banner. We are after all in the land of the enslaved and in the home of total cowards.

It's probably different in your current state of Kalifornia, but as a retired state cop living in Crook County I got a jury summons and all I had to do was show my star and ID to the County Deputies at the entrance to the Criminal Courts Building and I was allowed to bypass the metal detectors and the pat down search.