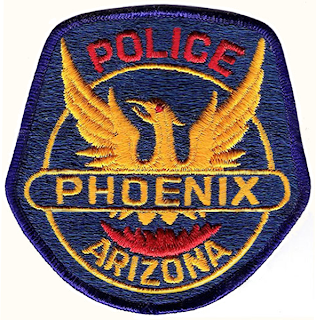 Phoenix, AZ—Four Phoenix police detectives are on administrative leave as the department investigates and determines their punishment. For the time being the department is not releasing their names or other identifying information.

Their apparent offense was to put up a PowerPoint exhibition at a private home that allegedly contained gruesome death scene photos.

I can’t imagine who thought they were doing a public service by snitching on these officers but even cops have a right to privacy.

The only argument that could be made is that some people may think this is somehow showing disrespect for the dead.

Let me begin by addressing reality. These photos are connected to public officers conducting investigations. These investigations are not secret nor are any evidence photographs. Arizona has a very broad and strong public records law. The courts must allow public inspection and viewing of any photos used as evidence. Over the years I’ve seen some shocking and awful pictures in case files I’ve had to examine.

One might argue this was in bad taste but cops are by nature desensitized to blood, guts and gore. They see and deal with this stuff everyday.

The internal investigation and actions of the City of Phoenix in this matter are a waste of time and money.

Had the officers placed these offending pictures in a public setting or did this to humiliate family members of the dead this would be different.

The city needs to get on with real problems instead of invading the privacy of their cops.
Posted by Paul Huebl Crimefile News at 2/08/2012 12:25:00 PM

back int he day I used to work in a suburban camera store were the cops got there pictures developed. They always enjoyed showing the more gruesome pictures, not that there were that many. They showed me pictures once of a guy that jumped off the Y and the only mark on him was the broken neck.

this is what happens when you have rinky-dinks as "Detectives" who only see this stuff seldom, in low crime areas. They try to act "Macho" and put themselves on the par with real-Big-City Detectives, which is, of course, absurd, no comparison... Normal people don't want to see that type of shit anyway. We even have some of those types in Chicago. Mostly , they are patrol officers, who like to fancy themselves being in the big-leagues, [Detective Division] here, while they still can't properly fill out a parking ticket.

"Mostly , they are patrol officers, who like to fancy themselves being in the big-leagues, [Detective Division] here, while they still can't properly fill out a parking ticket."

Sounds like you're one of the "real police". Check that ego son.

Mostly , they are patrol officers, who like to fancy themselves being in the big-leagues, [Detective Division] here, while they still can't properly fill out a parking ticket.

That is some Malignant Narcissism talking right there,oh my.

You know where good Detectives come from?From good Patrol officers.Patrol is the backbone and tip of the spear in any Dept.

If your a crappy Patrol officer,you make a crap anything else.
Now run along and call your Chinaman.