Bailing Out Bankrupt States is Inevitable 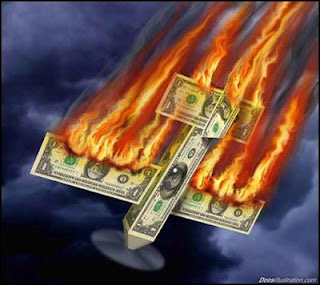 Los Angeles, CA—The not so Golden State has taxed and spent itself into a financial quagmire. Employers and producers have fled in droves to avoid the extortionate taxes here.

California taxpayers providing services to illegal aliens, is at an all time high. That has gutted the schools and health care needs of California’s legal residents.

The prisons and jails are pushing dangerous criminals out to certain unemployment in today’s economy. The body count will be off the charts and every Medical Examiner's Office.

California’s politicians have not and will not let up on their reckless spending habits or desire to regulate everyone’s lives.

The fact is it’s only a matter of time before they can no longer continue the handouts the Entitlement Zombies are accustomed to receiving. When that happens, Los Angeles and Oakland will be on fire like never before.

The death toll and massive amounts of homeless will be staggering. The other more frugal states will be forced to bail out California.

In Lockstep with California will be Illinois, New York and New Jersey. They have the same problems.

I hope the other states abandon these pathetic Socialist utopias that have gone bad. The fools in Congress will bend over as they claim bailouts are the only humanitarian way to solve the problem.
This will bring America closer to a Civil War for sure.

In the meantime America has changed in that the residents don’t care about liberty as much as getting a free ride. The color of the Nation has darkened and traditional work ethics and culture has been on a sharp decline.

The America most of us grew up in no longer exists. We are rapidly becoming a Fascist nation were people are enslaved by Socialism. We can either resist now or wait for the holocaust.
Posted by Paul Huebl Crimefile News at 2/20/2012 09:29:00 PM

Amerikwanistan is doomed. Collapse is baked into the cake. Get a good bunker and stock up.

these politicians would rather rein in hell, than serve in Heaven.


thing is, nobody actually reins in hell.

The worst thing any President did was when President Lyndon Johnson and his fellow Democrats came up with "The Great Society" programs in the 60's. It was all down hill from there, and turned minorities from a mostly self reliant group into today's entitlement zombies. We need to end these programs in a slow, calculated way, like weening a patient off of a toxic drug.

Amen Paul. Welfare is slavery, of a different sort, but alot of people can not or will not see it.