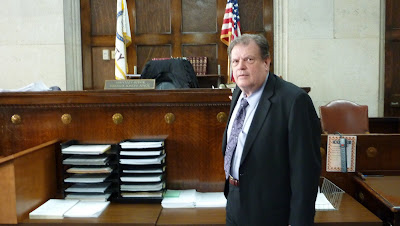 Phoenix, AZ—It’s appropriate that we get specific to Arizona because they have a much better tolerance for people that use deadly force in self-defense or the defense of a third person. This is about the Golden Hours between and arrest and an Indictment by a Grand Jury. Once you’re arrested or otherwise labeled as a suspect the race begins to indict you for, Manslaughter or even Murder.

Needless to say you’ve not uttered a word to police beyond your name, date of birth along with a request for a lawyer.

The Golden Hours is a tiny time period where you can defeat a prosecution and spare yourself and family from Bankruptcy, divorce, home foreclosure, car repossession and even years in prison. Depending on complications prosecutors could secure an Indictment against you in just a day or two.

Aside from being a gun rights leader of our nation, Arizona has solid protections from abusive arrest and prosecution as well additional protection from bogus lawsuits. Just because that’s the law does not mean you will be spared a spin at the Wheel of Judicial Misfortune.

Judges, lawyers and prosecutors all think they understand the dynamics of lethal self-defense. They fact is most only got they education from Hollywood productions. Just because they are in the criminal justice business does not mean they understand what happened in a fight for someone’s life.

Unfortunately criminal defense lawyers are sometimes little help because real self-defense cases are very rare in the system. Assumptions are made that the violent event is the product of an argument rather than an attack based on race, robbery, mistaken identity, rape or a violent over-reaction to a driving infraction on some highway.

For example you shot a carjacker in the back. The police and prosecutors may understandably believe you simply played God and executed the hapless criminal. There are various things that happen in the split second of a shooting and a self-defense expert can often give a convincing explanation for the back wound. You can wait two or three years for a criminal trial and a jury to decide your fate or you can make a case before a Grand Jury.

These two case cites, are the law that creates your golden hours:

Herrell v. Sargeant, 189 Ariz. 627 (1997) holding that the state's failure to present a fair and impartial presentation to the grand jury of the facts that related to the justification of crime prevention required that the case be sent back to the grand jury.

Trebus v. Davis, 189 Ariz. 62 (1997) holding conditions where the state must inform the grand jury that the defendant is requesting to testify to the grand jury. The state must also present exculpatory information sent by the defense in a letter to the prosecutor.

The Trebus case is about a suspect giving testimony before the Grand Jury. Such testimony is nearly always a terrible idea and must be avoided. Trebus does force prosecutors to fairly present exculpatory information to a Grand Jury empowered to determine if you should stand trial on a felony accusation. Having a lawyer present Trebus material to a prosecutor is critical. Saying that, too many lawyers routinely let those Golden Hours slip away ignoring Trebus.

The big question is how can you save yourself from an unnecessary Indictment and criminal trial with the help of Trebus? That’s where I come in as a criminal defense private investigator.

First I must be called, retained and let loose to do my job. Your lawyer if you have one will be busy trying to arrange your bail. My responsibility is to respond to the scene and investigate on your behalf. I need to find possible witnesses and interview them right away on video or digital media before their stories get spun to what prosecutors want to hear.

I have to examine the scene of the incident looking for things the cops missed like, surveillance video sources, shell casings or suspected blood. I need to shoot still photos and video of the scene so defense lawyers can see what was there. Getting out late to a scene may be disastrous especially in construction areas.

I need to find those witnesses that the cops blew off because their stories did not match what they wanted to hear. Believe me that happens all the time. Either I find them early or they may never be found. I also must examine the backgrounds of witnesses for criminal or civil fraud history.

Police and prosecutors almost never turn over witness statements or for that matter any evidence to the defense until more than a month after an Indictment when it’s way too late to use this information.

I have to see what material the cops gave to the news media because often I find gold in what they provided to them and sometimes more importantly withheld. Police agencies love to flood the media with self-serving press releases about their “heroic” deeds connected with high profile arrests. Yes, any self-defense type shooting will qualify as high profile.

I have to remain in constant contact with your lawyer during the Golden Hours to make sure nothing is overlooked.

What happens next is any helpful information I find is reduced to writing in a “Trebus Letter” and delivered to the prosecutors before the Grand Jury is convened. Let me also say prosecutors are not necessarily evil; even they don’t like prosecuting innocent people. There are those cases where prosecutors want a jury to decide if your use of deadly force was really justified. The only problem is that may take years and all of your worldly assets.

I have seen more than one person jailed for years only to be tried and acquitted having lost everything while they were in jail pending trial. They leave the jail wearing the same clothes they had on when they were arrested. How sad is that?

Call me to do your investigation and perhaps I can help you choose a top-notch lawyer like Jed Stone or Joel Brodsky of Chicago or Richard Gierloff in Arizona.