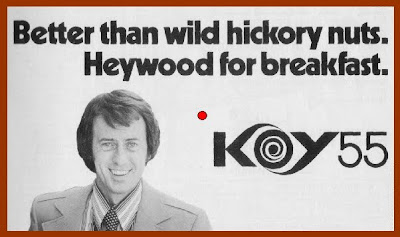 Scottsdale, AZ—One of the fathers of Phoenix radio broadcasting, Bill Heywood and his wife Susan were both found dead from gunshot wounds in a hotel here.

Heywood had the perfect mellow voice and could talk sensibly to a microphone about nothing for hours. He was considered a broadcasting pro and seemed destined to work forever in his well-paying high profile gig. He always had a warm smile in his voice and never dared utter a discouraging word. All of that changed.

Radio audiences dwindled but for drive time. Formats changed from music to hot-button talk shows. The local disk jockeys like Heywood were replaced by syndicated talent and forced out of the business. Heywood was washed up well before his time and then went into real estate just in time to see that industry tank too.

Heywood’s wife, Susan was his agent and with her primary client out of work she was idled too. Along the way were collection lawsuits, the foreclosure of their comfortable Biltmore Estates home and a Bankruptcy. Health insurance was another disaster as Susan began to suffer.

For the Heywoods there was no way out as hope and our economy failed them. They had suffered enough so after leaving a suicide note they shared a gun to end their misery.

I wish there was a lesson here we could all learn but there’s not. The reality is the Heywoods somehow deserved better but it’s a very tough world for so many. Perhaps the religious people are right and there’s a hereafter with no troubles or stress. I hope that’s the case and they can once again enjoy laughter.

Here is some vintage promotional video for Bill Heywood:

I was a huge fan of Mr. Heywood in the 70s. And you are so right, good people who thought they had done everything right are being destroyed everyday in this soul crushing economy.

I join you in mourning their deaths, and wishing them peace.

Their memories are truly a blessing.

Unfortunately, we are seeing this happening everyday. I am one of those people who have also lost almost my entire business. I am not happy with my life right now and am back to the income I had 20 years ago. But, life is a gift!! To end it due to lack of money is very sad!

They should have called on friends and family to shelter them as many people are doing. When pride over-rides the blessing of life, it is wrong to take your life.

SO many people have terrible handicaps and illness, but they don't take their lives. I am sorry but, what they did was wrong.

Where ever they are right now, I believe they are dealing with a lot of remorse for their actions.

Depression does things to people that are way beyond the understanding of those not suffering from it. Having suffered from Depression on and off for years, I understand this.

But once more, you reach out for help, not end your lives.