Gun Rights Must Become Recognized as a Global Human Right. 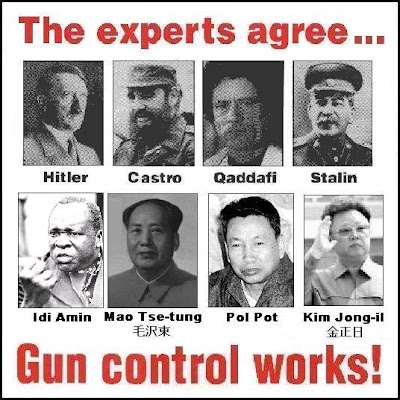 Berlin, Germany—It’s appropriate that the fight begin here because this is where the Nazi’s actually perfected gun control.

It’s here in Berlin that Adolph Hitler and his propaganda minister; Josef Goebbels demonized citizen’s gun rights as a threat to public safety.Guns were outlawed and the especially law-abiding and obedient German people surrendered their guns and liberty to that despicable and criminal regime.

Too many people on this planet have forgotten how 12 years of gun control and National Socialist rule caused the deaths of six-million Jews and Gypsies along with nine-million Germans.

It was the successful Nazi administered gun control that facilitated the abject horror on this nation and its citizens. Without arms it became impossible for Germany’s population to regain their liberty and freedom by any means.

We have experimented with gun control in America since it began during Post-Civil War Reconstruction as a way to keep the newly freed slaves disarmed and defenseless. Gun control has failed as a crime control tool everywhere it’s been tried. Not only has it failed, gun control actually guaranteed criminals safety as they robbed, raped and murdered. Gun control became the very best protection a violent thug could ask for.

America has more guns than ever with a sudden increase over the last decade to an estimated total nearly 300,000,000.

The rate of shooting and violent crimes has gone down everywhere gun laws have been relaxed. Gun related accidents have also gone down dramatically with the increase in gun ownership.

Governments are always the most prolific killers of their own citizens. Why would any Human Rights Advocate suggest citizens surrender the ability to fight genocide and tyranny?

The possession and carrying of arms for self-defense is a basic human right. No government should be able to disarm law-abiding citizens. No law-abiding citizen should ever have to go to bed frightened and disarmed.
Posted by Paul Huebl Crimefile News at 1/07/2012 06:53:00 PM

agreed, support of the 2nd amendment should be the deciding factor in the upcoming elections, Romney's record with gun controll as a governer is alarming.

That is a ridiculous idea that the right to self defense would be recognized by the Marxist inspired modern concept of “Human Rights”. This whole idea of human rights came about in the 1970’s as a means to redefine the concepts of “natural law and natural rights” that was so eloquently expressed by John Lock and Thomas Jefferson. The main focus of this redefinement is to exclude the Creator from the equation.

Observe the following from the Declaration of Independence:


“When in the Course of human events, it becomes necessary for one people to dissolve the political bands which have connected them with another, and to assume among the powers of the earth, the separate and equal station to which the Laws of Nature and of Nature's God entitle them, a decent respect to the opinions of mankind requires that they should declare the causes which impel them to the separation.

We hold these truths to be self-evident, that all men are created equal, that they are endowed by their Creator with certain unalienable Rights, that among these are Life, Liberty and the pursuit of Happiness.”


That is the entire reason in a nutshell why our government is unique in all the world, because we recognize that natural law comes from God and human beings are endowed with certain rights under that natural law.

This entire idea of human rights is an effort to remove the idea of natural law and replace it with human law. The critical difference is that human law can be changed whenever those in power desire but natural law can not.

Don’t expect these human rights advocates to be rational or logical in their selection of rights. They are not seeking to define rights but limit to them and control them. The day when people give up the belief in their God and respect for his laws we shall have no true rights at all because they will then derive from other men and therefore always be optional at their discretion.

Also keep in mind that Marxists do not believe that those who oppose them are humans. Marx justified genocide against opposition on the basis that those who fail to understand the virtues of the revolution are sub-human and must be erased from the gene pool. Therefore when a person talks about human rights, they are not talking about rights for everyone, they are talking about rights only for the Marxists alone and you can bet your life that such rights will never include anything that will grant a person exception from the tyranny of collectivism.

You really need to add Mayors Richard Daley Jr. and Mickail Blumeberg of NYC to that poster.