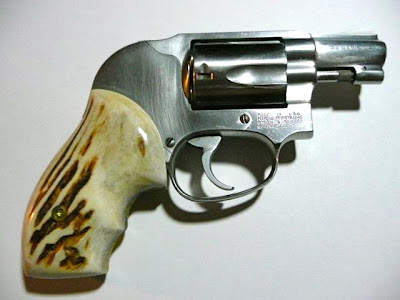 Los Angeles, CA—It’s appropriate that I write about this in jurisdiction with crappy gun laws, where they have unlocked the prison doors. Politicians here hate gun rights and have chosen for you to die rather than be able to fend off a killer. That’s the ugly truth.

I’m not very religious but this is a way to keep a seemingly complicated issue simple.

Our creator made man. Man was born into this world with some very necessary gifts.

1. Man was given the gift of fear. Without this we’d not have survived childhood.
2. Additionally man was given the basic instinct for survival and that with fear tells us exactly what to do in order to survive.
3. Last we were given the ability to make, or acquire tools/weapons that we need to survive.
We also know evolution has refined our gifts throughout time.

Everyday in America stronger, armed and better armed people commit atrocities against smaller, weaker or poorly armed victims. You either have means and ability to survive or you don’t.

Criminals have fear too and nearly always run when they face even a fair fight. Some politicians don’t want criminals endangered or to feel the need to run. These politicians are accessories to these criminls and they facilitate situations where law-abiding folks are unprotected and vulnerable to robbery, rape and murder.

I ask you why we should ever surrender the gifts our creator gave us to some mentally challenged politician? What politician has the right to take those gifts from us?

We not only have the right to protect our selves, families and neighbors but an absolute duty to do so that as a human being.

To stand by and watch someone rob, rape or murder is fundamentally wrong. Calling 911 and waiting 20 minutes for help will bring you little more than a clean up crew to remove the bodies.

Americans and our police must learn to ignore politicians trampling on the rights of law-abiding citizens to possess and carry arms as guarenteed under our Second Amendment.

In Los Angeles and surrounding communities they have slowly began mass prisoner releases. The crime right is climbing some 300% already and the worst is yet to come.

Those who remain untrained, unarmed and unprotected may learn about Darwin’s law the hard way.

If you’re attacked, simply shoot if you have to and scoot. Don’t hang around because some accomplice of your attacker may kill you. Don’t call 911 and make no statement to anyone but a lawyer about the shooting or why you shot. If police catch up with you simply say, “I want a lawyer.”

In the meantime you can only demand that your politicians return your gun rights.

Should you choose to carry a gun be discreet and avoid conflict. Remember the Fourth Amendment that protects you from unreasonable police searches still exists somewhat.

Judge the risk of being charged with a misdemeanor by remembering how many times you’ve been stopped and searched by a cop. That rick should be miniscule.
Posted by Paul Huebl Crimefile News at 1/28/2012 11:59:00 AM

It’s obvious like most Americans you learned law and how the criminal justice system works from watching television. You assume logic and common sense are part of the big picture. Unfortunately you’re simply dead wrong and would talk your way into a prison cell.

You talk about “getting caught.” That’s a suggestion that you’ve done something wrong. No law requires you to remain at the scene of or to report a shooting you're involved in. If you're justified, you're justified and you don't need some authority to sanction your action.

What I suggest is not Illegal or even immoral. Law enforcement needs to wonder rather than have your big blabbermouth make their case against you so they can get a commendation for your arrest.

If the law is on your side so is your right to remain silent. What’s your problem with that? In American we don't have to hear about anyone's refusal to talk to the police at any trial. Cops know this.

Let me say before you open your yap to get some sound legal advice from a criminal attorney. Do that now before something happens. Tell him you want to play straight and cooperate with the cops and see what he says about that.