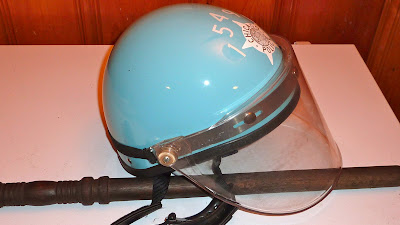 Chicago, IL—Some seven years ago on February 21, 2005, Howard Morgan wound up in a gunfight with several cops that he lost in a big way. When it was over Morgan was shot 25 times. What’s amazing is that he lived. Three of the patrol officers were also wounded, presumably by Morgan who was a lawfully armed off duty railroad cop. Morgan previously served asa Chicago cop.

I really have no problem with the amount of times Morgan was shot considering the ineffectiveness of the 9MM round the patrol officers were using.

The incident reportedly began when Morgan was observed driving without headlights around 1:00 AM in an area known for drugs and vice activities.

The big mystery here to me was a motive for Morgan to start shooting. I’m still waiting to hear one. Perhaps we will never know. The Howard Morgan gunfight was followed with all kinds of racial profiling accusations. This seems to be a case of Morgan being the only clear defense witness being outnumbered by at least four patrol officers testifying for the prosecution.

Morgan was tried but the first jury was unable to reach a unanimous verdict. It took seven very long years to try this case and this time Morgan was convicted on every count. Morgan now faces far more years in prison than he’s got left on earth.

I called this case strange because trying to suggest a reason for Morgan to begin shooting is difficult. That kind of traffic stop would never have resulted in even a citation given under the circumstances since Morgan was a cop. Cops always treat each other very well regardless of race. It's indeed a rare day when one cop writes another cop a traffic citation.

This sad chapter has ended with severe changes to at least four lives. I wish I could feel that justice was served but frankly I don’t have enough information beyond pure faith in the Cook County Criminal Justice System. Okay I confess that there’s not much real justice in Cook County. Let’s hope this jury somehow got it right.
Posted by Paul Huebl Crimefile News at 1/28/2012 07:24:00 AM

I got a very nasty response from a copper that I deleted.

I defend cops in trouble all the time and hope that the reasonable doubt goes in their favor. It’s better that we let some guilty SOB go free than convict an innocent.

A conviction never can undo the hurt, damage or return the dead to life. It’s a hollow victory for “justice” that provides little satisfaction.

Morgan may well have gotten even less than he deserves. The biggest problem I have is trying to figure out the motive.

For any cops who hate my take on this story think of me when you or a fellow cop is falsely accused. I will support and defend the reasonable doubt until death.

Paul, I appreciate your insights and good sense. JFK said "Life isn't fair," and that's true. But you are.

I was an alternate juror on this case and felt there were inconsistencies on both the prosecution and defense sides. I felt that perhaps he shot, but in self defense. In any event, there seemed to have been too much male ego in one place, at one time.

To suggest 4 Officers conspired is crazy. Especially if you were a Chicago Police Officer. Two cops can't agree on a lunch location let alone get a story together as to why they, without justification fired upon an armed person . As to motive. This isn't Hollywood there isn't always this great big motive. 4 Officers in a shit hole neighborhood and a violent end to a traffic stop. Boy, so surprising and there are plenty of unfit cops on and off( retired ) the job. Channel 7 had his story on years ago and portrayed the cops as racist thugs. Under no circumstances would I fire upon Police Officers.

Gang related,I know what time it is.

Agreed (never fire at officers). I still think common sense, good sense and horse sense (I'm still laughing at the prosecution and defense attorneys on that one) dictates that wrong decisions were made...on both ends...in all of under 3 minutes.

Paul your comment about cops never writing cops is what causes alot of contempt among common citizens. It tends to piss one off when off duty cops are observed not wearing seat belts, speeding, drinking and driving, etc. And then putting the uniform on and ticketing people for the same things they do, talk about hypocrites!!! Cops ought to stick to fighting real crime, but we all know there ain't any money in that. The money is in traffic tickets and bogus DUI's!!! "The more corrupt the State, the more numerous the laws".

I have continually and redundantly shouted my anger at politicians using cops as extortionists and bagmen for their nickel and dime revenue schemes.

Put your contempt where it belongs on the scum you elect to spend your money.

When I do this so many people are convinced we will all die if the politicians can’t get the revenue with crap like parking and photo traffic citations.

Cops really hate this crap because we are put in the middle and get the constant grief from the victimized public.

Some traffic enforcement is necessary but about 10% of what’s being handed out.

Cops don’t make a lot of money and every profession has its unique perks. Cops and very close family members get a pass on most minor traffic violations. That’s not a big deal.

We have the extortion/revenue game more than anybody. We know that the politicians and their pals are stealing billions every year.
Congress and the legislatures create every possible public records obstacle in the name of privacy to avoid detection. They design the laws so they can use our taxes like their personal ATMs.

There was a motive for officer Morgan being shot. He was a loud mouth union representative barking up the wrong tree and filing law suits. If he had fired all those shots at officers, there would be enough gun residue on his clothes to prove it. And it wasn't.

There was a motive for officer Morgan being shot. He was a loud mouth union representative barking up the wrong tree and filing law suits. If he had fired all those shots at officers, there would be enough gun residue on his clothes to prove it. And it wasn't.

Right sleeve buddy. It's there all fucking day. Another one who never went to the trial.

Morgan was stopped after a call of shots fired(or was it loud reports called by a PO,cant remember).

This is why another patrol car was nearby to assit the citywide unit.

When they stopped him he got out of the car and a scuffle began. He shot two Patrolmen. They kept pumping rounds into him but he wouldnt go down.

He was trans to Mt. Siani hosp. and he was begging for EMS to let him die. Unfortunately they didnt.

Anyhow, he was probably the guy who was shooting and thought the PO's knew. Or, he was just another savage.

Ok first and formost there was gun shot residue all over his jacket so stfu about that. Then there was a hole lot of evidence the jury was never aloud to hear about this case because the judge didnt want to piss off the defense. Oh btw crimefile he was not legally allowed to carry that gun he is given to and from work thats all and he did work that day. Oh and he didnt have a foid card. Oh why did he leave cpd? Why shortly after 7 years from leaving cpd did he get a job as a special police officer? Back then internal affairs for cpd only kept records for 7 years, makes you wonder. Oh and to the alledged alternate from the jury well 12 of the other 13 took less than 3 hours to convict.

Oh yea, i was there. and the evidence tech who got the residue from the right sleeve, said it could have come from the Police officers firing over him while shooting him from the front and back. This is inconclusive evidence and reasonable doubt. Please try to use common sense and not profanity.

i know from your response who the real savages are. You must have been there, right?
They pumped 25 to 28 rounds in him and he didn't go down. I know he is a black man, but not Superman. Oh, the eye witness lied, after being threatened not to testify, and brought to court under protective custody? The eye witness testified that he was pulled from his car to the ground and when they saw he had a gun on him, and the rookies pumped rounds in him. Doesn't that make since, with the officers knowing shots had been fired in that area. If you saw someone with a gun, would you wait for him to fire at you first?

Judge Clayton Crane could care less about pissing off or on some defense attorneys. That's what he is paid to do. Officer Morgan did have this Foid card on him, but it had expired by some months when this tragedy occurred. He was currently employed as a Railroad Police Officer. Police Officers carry their weapons when off duty. What's the penalty for needing to renew this card. A warning at best. Is this enough reason to jump out of his vehicle and start firing at fellow Police Officers? Keep it real!

Yes, that is what the evidence tech said. A modern day lynching. Yes, fortunately for prosecution I was picked as an alternate, otherwise, it would've been another hung jury. I still believe this man with no prior criminal record had a motive for opening fire on those officers unless it was self defense. How tacky was the prosecution for suggesting he'd stopped for a hooker because he was possibly having problems at home?! How ghetto!!

Also, let the record reflect that all the crime scene photos showed a van with lights on. Addiitonally, only one of the two squad cars heard the "loud report" coming from that direction. The second squad car that was in the same area, heard nothing. Yes, this alleged alternate listens and comprehends very well. I hope I don't get harassed and possible police brutality as a result of it.

Was this SUPER COP or just an unidentified off duty cop, who just happened to be black and lived in a crime infested neighborhood in Lawndale. Got stopped by Rookie cops in the wrong place at the wrong time with a gun in his waiste band. Thank God for saving his life. Sorry Brother.

Police officers are not required to have a FOID card for duty weapons or ammo.Most police brass do not know this because they are so dumb and too busy buffing the german helmut.

We don't need John Burge any more. We are sophisticated now. We have Judge Clayton J. Crane. Just send these kind of cases to him.

another win for TRU Paul. This guy bit off more than he could chew that night, too bad.