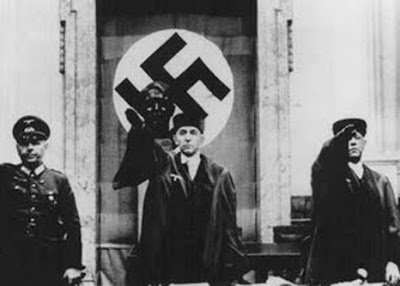 Entertainment is exactly what they are creating. Turning courtrooms into media circus venues began inside The Peoples Court of Nazi Germany. The Show trials of Hitler’s courts were played in every neighborhood theater along with the regular films.

The Nazis learned from the Romans who dispensed “justice” at the Coliseum. People have an appetite to see the process of punishment utilized against their fellow man. Make no mistake standing trial for a crime in any forum is punishment.

The man pictured above is the father of televised trials. He’s Judge Roland Frisler who sent thousands of German citizens and at least one American woman to their deaths. Their crimes were that they resisted Nazi tyranny.

Another huge problem with televised trials is that it allows witnesses to see and hear each other give testimony. It’s the custom to exclude all witnesses from any court proceeding until after they testified.

People engaged in perjury conspiracies are obstructed by the exclusion. When they hear each other’s testimony they can keep their story lines in order. This move will corrupt trials.

If instead they broadcast trials after they ended lots problems could be avoided. News providers would be upset because the delay would turn news into history.

Lawyers, witnesses and judges turn into defacto entertainers. They play to the theater and embellish their roles. Many witnesses are reluctant to truthfully testify if doing that would prove embarrassing with the whole world watching.

Too many lawyers love the idea of winning television fame as players in the theater of the courtroom.

TV news providers know this will bring ratings and new revenue so they understandable welcome this change.

The Nazi regime used show trials as an intimidation technique to terrorize the population as a way to shut down any resistance to their tyranny.