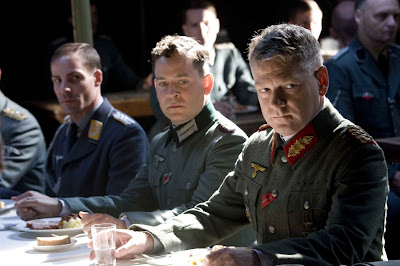 Los Angeles, CA fresh from a transcontinental flight British actor, Kenneth Branagh paid a visit to a Screen Actors Guild showing of his latest film and was interviewed for a small audience of fortunate SAG members. As a SAG member I must admit attending these SAG Foundation events is a real perk for me.

Branagh has a gift of a marvelous baritone voice that’s mixed with perfect diction of the King’s English. I approached him afterwards and called to him, “Herr General Von Trescow!.” That got a big smile as he beamed with pride for playing that role in the film Valkyrie.

I told him I want to see the tearjerker film of 21 year-old, anti-Nazi martyr Sophie Scholl remade for an English speaking audience. Sophie Scholl along with her brother Hans Scholl, and their friend Christophe Probst were discovered passing out anti-Nazi leaflets at the University of Munich in 1943. They were tried for Treason and beheaded on a guillotine at the Staddleheim prison. The complex role of Gestapo Inspector Mohr would be perfect for Branagh. Emma Watson is now the perfect age to Play Sophie Scholl.

Needless to say, Branagh is at the zenith of a great career and can do whatever we wants. He never fails his audience.

A for the film, “My Week With Marilyn”, I had no great expectations because two actors, Marilyn Monre and Sir Lawrence Oliver were to be mimicked. Usually I find actors do crappy impersonations of famous characters. This however was not the case. There were fine performances by an ensemble cast including , Michelle Williams, Eddie Redmayne, Judy Dench and an adorable, grown up Emma Watson from Harry Potter fame.

Redmayne plays a then 23 year old Colin Clark who by chance becomes a third-assistant film director on the film, The Prince and the Showgirl.” Clark meets the confused and vulnerable 30 year-old American actress just as her new playwright husband Arthur Miller abandons her in London. They had a short one-week, but hot romance that was the subject of the film.

The magic of the films is the collision of two quite opposite actors, Olivier and Monroe. Olivier is placed into a real love-hate relationship with Monroe who is suddenly thrust into a sea of British actors. Monroe goes through culture shock but is helped along the way by her new young lover, Clark.

Michelle Williams has a great career ahead of her. The film was excellent and worth the admission price. Both Branagh and Williams woke up this morning to learn that have been nominated for SAG Awards for their respective roles.

The Sophie Scholl Story was effectively done in German,just like Downfall(Das Boot too!!).I found the German language version well done and extremely powerful.Doing it in English wont have the same effect and would only be for commercial gain in the American market.

I didnt care too much for Valkyrie because it reminded me of war movies from the 1960s and 1970s with British and American accents on German characters.

I'm not a SAG memeber,only a movie buff, but I have given some fine performances in the Cook County Court System!!!

I wonder if we will ever be allowed to see a movie about communist crimes against humanity?

I really enjoy visiting your blog! your interesting system to see things is what keeps me interested. Thanks so much!!!!

YES, Paul,you were in the presence of greatness. Ive been a huge fan of Branagh since 2001's CONSPIRACY; he played a helluva HEYDRICH, probably the best one.
Judy Dench? Whoever thought she would be the best "M"(Bond's boss);
great actress...

We talked about Conspiracy and the Wannsee Haus, the beautiful villa on the lake just outside of Berlin where that fateful meeting and luncheon occurred. Conspiracy was also filmed right there where it happened. Here is a video of me at that Wannsee Villa.

Cut and paste that link into you browser

Anonymous said...
I wonder if we will ever be allowed to see a movie about communist crimes against humanity?

Just turn on the local news in Chicago if you want to see that sort of thing.

The movie was wonderful. Michelle Williams shines as Marilyn Monroe and it's always a amazing to watch Kenneth Branagh on screen. I had the pleasure of doing an exclusive interview with him as well, where I found out who he'd like to play him in 30 years if there ever was a film for "My Week With Michelle". http://bit.ly/tdO7I4