The official Crimefile Review of, “THE LAST RITES OF JOE MAY” 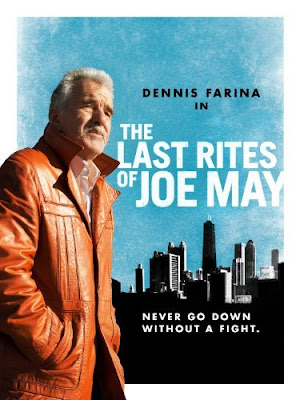 Los Angeles, CA—Former Chicago police, Area-6 Burglary dick Dennis Farina took on a great role and has knocked it out of the park. Farina has been a successful actor ever since he consulted with movie director Michael Mann on the film Thief. Farina got a bit part in the film and former Area-6 Robbery sergeant Chuck Adamson wound up a somewhat meatier role as a corrupt Chicago police sergeant (a big stretch-not!)

Adamson went on to be a screenwriter until he passed away a couple of years ago in Oregon where he retired.

Farina never forgot where he came from and still attends copper’s retirement parties and funerals.

I was lucky enough to see a screening of the film and have a chat with Farina after the film. At 68, Farina is still in rare form and seems ready to take on the world.

As for the film associated with Chicago’s Steppenwolf Theater it was a dream vehicle for Farina. The story was penned and directed by Joe Maggio. The film was shot in an incredible 19 days. Needless to say it was all Chicago through and through.

Farina’s character Joe May was an ageing small time hustler who returns from an extended Cook County Hospital stay after surviving a bout with pneumonia. May is a man with few friends and an estranged son. There are of course his acquaintances and a former partner who retired in an assisted living home.

May returns to his low rent apartment of 40 years, only to learn it was rented out to a young single mother, Jenny (Jamie Allman), and her adorable pre-teen daughter, Angelina (Meredith Droeger). May’s property was sent out to the trash by the land lord and he suddenly finds himself homeless and too proud to ask for help.

Jenny is involved in an abusive relationship with a control freak thug who just happens to be a cop and a collision course is set in motion.

May is in the struggle of his life to re-establish some kind of relevancy and to maintain his dignity. May’s search for work is aggravated by his age but he puts one foot in front of the other and moves forward. His search takes him to a sleazy and nasty underworld boss played by Gary Cole. Enough spoiling of the plot here so I will move on.

The real muscle of this film is that is about real people with real problems and emotions that must be faced. There are no special effects, expensive sets with the usual Hollywood eye candy. There is just a great script, wonderful actors that makes seeing this film compelling. It will make you want to be a little nicer to the Joe Mays in your life.

I don’t write reviews on films I don’t like. I love this film, cast and crew. Spend the money and see it in the theater. It’s definitely a date film so bring that special someone.

Thanks for another excellent review. I've never heard of that movie but will definitely check it out. Dennis Farina is da man!

I searched all over the internet and can't find any place in Chicagoland where the film is playing. Do you know where Paul?

This is an independent film and won't get the distribution of the big studio created movies. It will show at smaller movie houses and hit the DVD market quickly. Farina is on a massive media tour trying to get this promoted because you won't find expensive advertising like a large studio release. Don't let that prevent yopu from finding this gem.

Farina is past his prime and took this opportunity to take a leading part for a change. He took a bath financially but it may get him better work in the long run.

Since his gun pinch at LAX he has been in a downslide. He reunited for a spec TV series with Michael Mann called Luck. That series was finally picked up for December by cable TV rather than a network. Luck has some "A" listers in it. There are only four episodes so far.

I also looked at the Chicago area theaters and could not find it. I finally managed to locate it on Amazon.com in their streaming movies section, Amazon on Demand. I have a Roku device so I can go to Amazon on Demand and stream it.

I was a Cadet in Chicago in 1966 and went on the Job in Oct. 1967. I was latter transfered to 20 where I met and worked a few times with Dennis. I also left the job and followed Dennis through the years. I'll look foreward to seeing this new film. Keep up the good work..