Arizona Lawyer Charged With Murder, But Was It Justifiable Homicide? 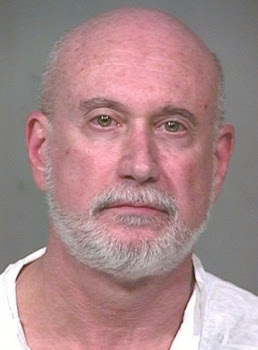 Scottsdale, AZ—Long time lawyer Dave Appleton, 59 apparently called police for help because a motorist had chased him and threatened him with a motor vehicle. The chase ended in a fatal shooting at a CVS pharmacy parking lot at Pima and Pinnacle Peak Roads @ 7:30 PM.

The aggressor, Paul "Tom" Pearson, 50, attacked Appleton through the window of his Toyota SUV. Soon thereafter the Pearson lay dead from a single gunshot. Police grilled Appleton for hours and finally charged him with Second Degree Murder despite a claim to self-defense. Appleton told police the younger man was trying to strangle him.

I’ve known Appleton for 25 years and found him to be a bookish and gentle soul. He is hardly a combatant and I know him to be reasonable and anything but aggressive. He’s not the kind of guy that would flip off another driver with a middle finger or look for trouble. I can't imagine him hurting a soul unless he was in fear of his life.

I suspect that a lot of people know about the dead assailant and I’m asking for any and all information that would assist Appleton in getting a fair trial.

It will take a while to get the toxicological report that would disclose what was fueling Appleton’s attacker.

If you have information about Paul Pearson by all means e-mail or call me. You can even leave a comment with a way to contact you and I won’t publish it. I will forward the information to the proper place.

Appleton being a lawyer should have known better than to talk to the police but he is a cooperative kind of guy. It might have cost him everything. Never talk to the police if you must use force to defend yourself or a family member. I'm on my way to Scottsdale and will get to the bottom of this case.
Posted by Paul Huebl Crimefile News at 11/11/2011 06:57:00 PM

Gotta wonder why he would not limit his statement to, "I was in fear for my life. I thought he was going to kill me. Now, please take me to the hospital."

You've said far too much by suggesting mitigation. No, SHUT UP and only ask for a LAWYER!

I have known Dave about three years and have to agree there is no way he would commit a crime out of anger. He is always calm and level headed. Amazing how the media leaves out that the other man was a convicted felon, not to mention why would someone follow someone else into a parking lot and then get out and approach the vehicle at night...that alone would make me fear for my life let alone the physical altercation.

There are two felony convictions in the records of the Maricopa County Superior Court related to Narcotic prescription fraud.

Castle doctrine applies under recent legislation to your vehicle under the stand my ground rule. The biggest change is a result of the Fisher case where now the state has to prove you were not justified to use deadly force. Prior to this change it was the defendant who had the burden of proof.

Why was Appleton booked for murder then?

Any dope that uses a 3000 pound vehicle to bully, chase and endanger the life of another motorist and then jumps out of that vehicle to confront and assault the other driver deserves to be killed. This is just a simple case that proves Charles Darwin was right.

I too have known David for at least a decade. He has always shown himself to be kind and even keeled. It's obivious to me he felt his life was in danger. David is very responsible with his weapons. I can't say I wouldn't have done the same exact thing if I was in that situation. I will keep David in my prayers.

What a putz this Pearson guy was! That ridicules story Pearson's pals are trying to sell that he only wanted to help a driver in distress must be a joke right? Who in the right mind is going to swallow that crap?

Pearson's tough guy macho act cost him his worthless life. Tough shit! His family is much safer without that dangerous fool around anymore.

Why are the cops wasting the court's valuable time with this bogus arrest?

I don't get why this guy talked. If I was the Det assigned I would have read him his rights, told him not to talk to me, and let him use the phone to call a attorney. And yes, I am a 20 year police Officer currently a Detective.

Paul, off topic. Can you comment if the below-incident is bonified. If so, this is another compeling argument for citizens to arm themselves. No women or man should be expected to endure this, worse-than-death treatment.

Maybe a new post on this incident is warranted.

This article is so full of BS. How do you clowns sleep at night and come up with this crap. I know the Pearson family very well and according to the Scottsdale police Department and the person on the other end of the phone that Pearson was talking to at the time stated the only reason Pearson pulled over was because of Appleton's erratic driving and when he stopped he thought he got out to his car because he thought Appleton my need help. In addition, Pearson was on the passenger side of the car when he was shot and killed.
You guy's are just a bunch of classless clowns.

Whoever these people are that say that Person was only trying to help Mr. Appelton must think the rest of us are total morons. Thats right, we can believe a twice convicted felon who is a prescription narcotic addict followed Mr. Appelton all those miles because he was concerned for Mr. Appelton's saftey, and got out of his car only because he wanted to check if he needed help. Come on. Johnny Cochran couldnt sell that to a jury of mental defectives. And how by the way did the guy who was twice convicted of forging narcotic perscriptions end up in a CVS pharmacy parking lot anyway? Finally, if Person was only trying to help an erratic driver, why was that erratic driver on the phone to the police saying he was being chased and threatened? Do all people who are dirving erratically just randomly decide to call the police and say they are being chased? Nice try friend of Mr. Pearson, but it won't stick, and by the way now you will have to find someone else to buy your oxicontine from.

Only a total moron would chase someone with a car and then confront them. This is a case for the Darwin history book.

Scottsdale Police always screw up major cases. The victim here was the lawyer!

I've known this man, Dave Appleton. He was truly defending himself. What would you do if someone was trying kill you-- Do you lie back and let this happen?! I am sorely disappointed in our police and media for what he must endure by saving his own life.

There is a massive amount of lies being spread about this case by Tom Pearson’s pals. The story he was out to buy medicine at the CVS does not wash since he was certainly well enough to chase down and assault the lawyer.

Like it or not Arizona lawmakers have given everyone the same legal protections that allow deadly force to be used on home invaders when criminals invade our motor vehicles.

The cops know that the lawyer’s shirt was ripped. The cops claim that the lawyer was not injured. I did not know that police academies trained police officers in medicine. Why didn’t they take him to a physician and let their theory be validated by a professional?

Where are the 911 calls? They always love to release them to the media but not on this case. What’s that about?

For the Scottsdale police to claim that the lawyer’s two previous calls to 911 reporting other drivers is suspect or an indication of unreasonable behavior is a sure sign that they don’t have evidence to support their theory.

I feel bad for the dead cowboy’s lovely wife and daughters. They are in a financial mess and don’t deserve what they are going through. They are innocent bystanders that deserve the love and support of the community.

The fact is sometimes people’s tempers control them instead of the other way around. The fact that Pearson lost his temper and tried to throttle a driver that pissed him off cost this father of three his life.

The lawyer deserves nothing less than a fair review by the County Attorney before charges are actually filed or an indictment sought. The law is the law and the lawyer’s use of deadly force was in fact authorized by law.

I guess Scottsdale police want to re-write Arizona law making self-defense a crime. Appleton's mistake was to call 911, stay at the scene and cooperate with Barney Fife.

We need more people defending themselves the way Appleton did. The sad part is the Pearsons of our world still don't get it.

Scottsdale police proved once again to be real dopes in yet another major case.

I hope the court will be reasonable enough in his case. They should prove that Appleton really have a desire and plan to kill Pearson. Otherwise, it is just homicide and he can claim self-defense.

It's become obvious to everyone that this was a case of justifiable homicide. Arizona unlike California has a solid Castle Doctrine Law and the evidence and facts are clear. There is no evidence that this shooting was somehow not justifiable.

The burden is on the state to prove a crime her, not for Appleton to prove anything at all.

There is a sad side of this for a wife and three daughters having to face the fact that Tom Pearson lost his temper and tried to become a punitive traffic cop. His using physical force on someone seated in the safety of their own vehicle cost him his life.

Since this case occurred last year, I wonder what happened with Appleton. Would appreciate some links. Lawyer San Diego

Some six months has gone by and there has been no new evidence produced, and nothing's changed. Every single piecet of evidence points squarely to the justifiable use of deadly force by Appleton.

The Scootsdale police have done absolutely everything they can to try and force this innocent man to stand trial. I guess some Scottsdale cops hate the Castle Doctrine. That is the law of the land you don't get to extract other drivers from their cars or choke them unless of course you're willing to get shot.