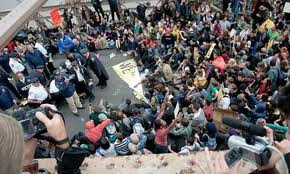 They're in most major cities right now. They’ve been recruited for this mission because they’re Barack Obama’s loyal storm troopers from the SEIU, Moveon.org and ACORN. They are milling around with non-specific, confusing and mixed agendas.

They simply are trying to gather enough people to openly disrupt our commerce and economy further. If they can assemble more people they will have enough to create massive insurrections.

We can expect looting, burning and murders if they manage to get sufficient manpower to neutralize local police. If Obama’s thugs have the numbers they know that the police will be ordered by their Democratic Party mayors to stand back and watch forcing Americans to take the law into their own hands.

Business owners and people trying to earn their living at some point will turn on Obama’s thugs returning their violence in spades. That will give Obama the excuse to suspend the Constitution and declare Martial Law. Elections will also be suspended keeping Obama in power.

That move will bring the Civil War that Obama and his socialist minions are itching to begin. Obama knows that either he pulls this off or his dark shadow over our government will end.

What Obama does not understand is that the military training of millions of honorable veterans along with well-armed and trained civilians will crush his undisciplined thugs.

I doubt that our military and police will follow Obama’s orders to fire upon fellow Americans. There will be serious population control and perhaps a million fewer Entitlement Zombies sucking blood from their neighbors.

Caught in the middle will be lots of young folks that have neither the skills nor inclination to fight for survival. The Ipod and YouTube Generation will scurry around like frightened sheep unable to cope with food, water and Internet interruptions. Cell-phones service will be restricted or shut down too.

Rather than to invest in gold, lead and gun powder along with CB or family service walkie-talkie radios, batteries and non-perishable food will provide a much better return.

The Socialists and communists in our own government have placed Americans into a situation where they’ll once again have to answer the call for duty to protect and preserve their freedom. There will be no other fix unless we are willing to accept fascism.
Posted by Paul Huebl Crimefile News at 10/09/2011 12:52:00 PM

Paul, you wrote "I doubt that our military and police will follow Obama’s orders to fire upon fellow Americans."
I agree, and respectfully suggest that's when foreign troops will be invited in.

Lergnom said...
Paul, you wrote "I doubt that our military and police will follow Obama’s orders to fire upon fellow Americans."
I agree, and respectfully suggest that's when foreign troops will be invited in.

I believe that there will be enough of them that will, just as in the Police Department, there are many mindless drones who don't get the big picture, and will do anything their politically-connected bosses tell them to do. The time to fight fire with fire IS coming.

If this is true, it is proof positive that we have a psychopath in the White House. After the rest of his antics, along with Operation Fast and Furious, it is certain he is a radical Communist with delusions of destroying America and rebuilding it into a Socialist Eutopia, aka. "Banana Republic". The most racist , hate-filled , and incompetent President in U.S. History.

I've tracked Day of Rage for several months, nothing good is going to come from this.

Patriot is right, we have a psychopath in the White House.