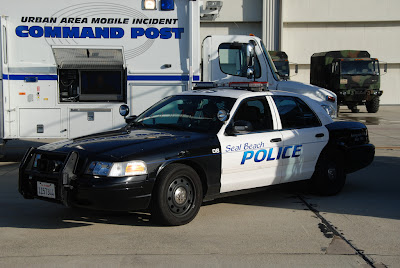 Seal Beach, CA—In this beautiful seaside bedroom community of 24,000 residents the unthinkable happened today. Police responded to a 1:21 PM call of shots fired at Salon Meritage on the 500 block of Pacific Coast Highway. So far eight of nine victims her were shot are dead. The ninth victim clings to life in critical condition at a local hospital.

Police followed a middle-aged suspect who was driving a white Toyota pick up truck. During a felony style police stop at 12th & Central he was discovered armed with semi-automatic pistols and loaded magazines. Under his shirt he was wearing a dark blue protective vest, and police SWAT style shin guards. He was also wearing blue police style cargo pants. So far police are silent about the man’s identity. The silence alone says volumes about the suspect and his occupation.

As of now at 6:00 PM police are pretending they don't know the suspect's identity but they are currently processing his home as a crime scene. Neighbors describe the suspect as a quiet and private man.

Judging by the suspect’s unusual effectiveness with the handgun used and the type of equipment involved he appears to be a well-trained law enforcement officer.

Employees and people familiar with the salon claimed that one of the victims was involved in an acrimonious relationship with a man suggesting that this relationship became the motive for the carnage.

I am waiting for a call from authorities handing the investigation.

Update:
Police said Scott Dekraai, 41 of Huntington Beach, CA, is the suspected gunman. It’s believed that Dekraai had targeted his ex- wife, Michelle Fournier. Since their 2007 divorce they’d been fighting over child custody. Fournier recently sought a restraining order against the suspected gunman.

Dekraai worked in maritime related employment and has a military background. He has apparently no law enforcement employment or training.
Posted by Paul Huebl Crimefile News at 10/12/2011 05:58:00 PM

And this happens when the politicians and Gov of Kali make illegal open carry of handguns.

and the last court appearance was the straw that broke the camel's back -and those innocent victims - he shot.

Beware of people in intense pain - such as those in custody battles....You never know when someone is going to snap and go ballistic.

many Deaths might have been prevented, if some form of Civilian Concealed-Cary of firearms were Legal in the Land of Fruits and Nuts. All the Politicians and Celebrities out there manage to get away with carrying Concealed Handguns, but Joe average Citizen can't. This is due to the State being run by Communists, just like U.S. Government currently is.

You see the story is as old as time. Euripides wrote the play Medea in 431 BC about a woman killing her children out of revenge for a marriage gone wrong.

This is exactly what happened here - the father cut off his nose to spite his face big time...

Here is some info on themes from Medea which are at work in the slaughter at Seal Beach, and of course this passion and slaughter can arise whether the perpetrator is a man or a woman.

Passion and Rage
Medea is a woman of extreme behavior and extreme emotion. For her passionate love for Jason, she sacrificed all, committing unspeakable acts on his behalf. But his betrayal of her has transformed passion into rage. Her violent and intemperate heart, formerly devoted to Jason, now is set on his destruction. The Greeks were very interested in the extremes of emotion and the consequences of leaving emotion unchecked; they also tended to see strong passion and rage as part and parcel of greatness. Medea is an example of passion carried too far, in a woman perversely set on choosing rage over mercy and reason.

Revenge
The seductive appeal of revenge is part of the play's enduring popularity. Medea is willing to sacrifice everything to make her revenge perfect. She murders her own children, paradoxically, to protect them from the counter-revenge of her enemies; she also kills them to hurt Jason, although in slaying them she is dooming herself to a life of remorse and grief. But part of Medea's appeal is its power as a revenge fantasy; just like Medea, all have at one time or another been beset by enemies whose power is institutionally protected and unfair. And like Medea, we have fantasized about the satisfaction of a perfect revenge. Like the Chorus, we watch Medea with a mixture of horror and excitement.

I believe Art copies Life and vice-versa. I also believe that the father could not have been thinking of his son - otherwise he would not have done it.