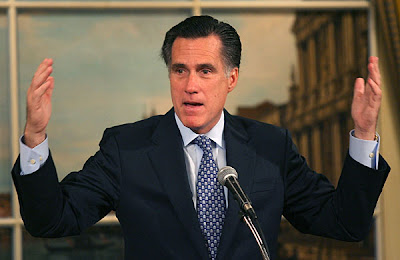 Somehow I expect that Romney’s Primary campaign is being funded by Obama supporters. A GOP Primary pitting Romney against that other pretender Rick Perry is the Democrat's, dream come true.

Romney has proven to be a big spending, gun rights hating, entitlement loving politician who will say anything at all to get elected. Romney’s stellar record as a Massachusetts Ted Kennedy style Liberal won’t be endangered if he somehow gets into the Whitehouse. That will never happen because disenfranchised Conservatives hate pretenders and will sit out another election rather than vote for a total fraud.

The closest candidate to a Conservative in my lifetime was Dwight D. Eisenhower. Ronald Reagan was a genuine moderate that appealed to nearly everyone. Reagan was limited by a Liberal Congress but our nation was headed in the right direction with economic growth facilitated through lower taxes.

George H.W. Bush was a pretender that got us into a war and set us up for permanent oil dependence on his Arab friends. Clinton could do little to reverse the good fortunes Reagan brought. George W. Bush was really destructive to our economy in every possible way and all but made us property of the Chinese Communists.

Obama is a genuine traitor and has set about the total destruction of our Constitution and way of life. He has done all he can to divide this once great nation and start a Civil War as a vehicle to install a Communist/Socialist government. He is not finished yet trying to capitalize on every crisis that he creates.

It looks like Obama won’t be reelected even if he somehow survives this first term. The Impeachment knives are out looking to draw some blood over rampant corruption. Frankly I don’t rule out a prosecution for treason or even murder for his part in the killing of Brian Terry. The Fast and Furious gunrunning scandal was and is part of a Whitehouse conspiracy. Obama is a stain on America that must be removed.
Posted by Paul Huebl Crimefile News at 10/30/2011 06:16:00 PM

Romney already had his chance and failed. He won't do any better in 2012, which is why the Democommunist Party wants him to get the Republican Nomination so badly. Time to support the most Conservative Candidate for President. At this point, it appears to be Herman Cain.

I can't see how any conservative could support Romney. That crap-weasel RINO cannot be trusted.
He's a Democrat sporting the (R) in his title.

If he's the nominee, I'll stay home and endure O-douche nozzle for another four years. At least the House can stop the majority of his BS.

Wall Street Bankers and corporate billionaires put Obama in office, to do their bidding, which he is gleefully doing. IF they want Obama in for 4 more years, they will keep him in, by hook or by crook, even via voting machine hacking, which is how they got George W. Bush re-elected in 2004 (he lost to Kerry in the REAL number of votes, but the voting machine hackers made Bush win, anyway).

If Obama loses the election, it will ONLY happen if the bankers and billionaires want a new face in the White House.

We will never have a truly "free" election where OUR votes decide the outcome, until we remove the bankers from power, and go back to hand-counted, paper ballots.

God told you Obama﻿ is a traitor that wants to "destroy" America?
BUT, you are the guys with all the guns, fear and venom. Obama is not as left as you wish he was. By the way BUCH and CHAINY made America an enemy to most countries of the world. They killed how many thousands through their discusting projects. The war in Iraq was a criminal act and a poorly run war whose only purpose was to make huge profits for Helburton, Exxon/Mobil, Black Water and their likes. Iraqi oil was suposed to pay for these wars, but that never happened. Now our country is sinking under the weight of coruption and greed directly created by the deregulation of the banks by Reagan and Buch and other federal agencies that only benifit the top 1%.