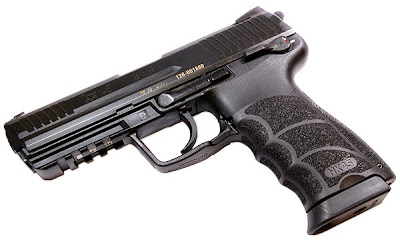 Chicago, IL—In most police agencies the service pistols of our cops is restricted to department-approved firearms. What gets approved is based on many things but too often common sense is not one of them. There is a lot to be said about all officers using the same caliber of ammunition but only if the department plans to replenish the officer’s supply in the field should there be a major insurrection. I have never experienced that happening nor do I know anyone who has.

Most cops can remember the Bank of America shootout in North Hollywood where poorly armed officers were threatened and actually shot by two felons armed with Russian fully automatic AK-47s and more. To end the firefight cops had to borrow heavier weapons from local gun shops. Today there is still not a single gun shop in Chicago.

No police officer should ever be endangered by being outgunned like today’s Chicago cops. This should be a major scandal but will never be addressed until some fine cops perish at the inaction or pleasure of bureaucrats.

I am no fan of the .40 caliber cartridges that were adopted to cater to female officers deemed to dainty to handle the .45 ACP. I take exception because I know some petite women that handle the .45 better then most men. Cops are somewhat stuck with what they are permitted to carry. Training and practice is the only key to accurate shooting and survival.

I favor the Sig Sauer 220 in .45 ACP as a terrific and reliable pistol. The Glock 21 is also wonderful but I am too concerned about the trigger configuration and fear an unintentional discharge particularly during an altercation. But I’m a perfectionist and demand the very best.

The H&K .45 has been around for a couple of years and has proven it to be the winner. This pistol is not to be confused with the USP pistols that I considered to be cumbersome boat anchors. The H&K .45 is sleek, sexy and smooth. It has the accessory rail, night sights and wonderful magazine releases. The cost of the H&K .45 is steep especially in today’s economy.

I’m not a fan of the double action only configurations sought by the risk management sissies hired by most government agencies. I prefer what was originally intended, double action on the first shot only. The H&K .45 can be easily configured both ways like a bi-sexual.

Seriously, isn't that pistol a little big for CCW? And do I as a retired PO really need all those rounds?

Dude. The .45 is over rated. The .40 offers just as much stopping power as the .45 depending on ammo type, and in one case, more.
I am almost positive that I pointed this out before.

Take a look at the Hatcher rating scale for the different types of calibers.
http://www.freerepublic.com/focus/news/849728/posts

I don't buy into the .45 being the all powerful handgun round. I've fired both. A smaller recoil with comparable stopping power is way more beneficial. I can get my pistol back on target faster and put more rounds down range if necessary.

I think it is a matter of preference, not of stopping power. Denigrating the .40 as a "female officers" weapon because of less recoil is simply disingenuous.

Paul,I shot an HK45 earlier this year.All I can say is that it was flawless in reliability and dead nuts accurate.If you want to do head shots at 25 meters out of the box,buy this gun.
Im still curious as to why the HK engineers settled on a 10 round mag capacity.S&W MP 45 is the same but the Springfield XDM 45 holds 13+1.They must have a engineering reason,the Germans are good at these things.

HK=expensive,but what is your life worth?????

It is a good gun. The classic bang for your buck applies here. I read that these are standard issue for the law enforcement brigade.