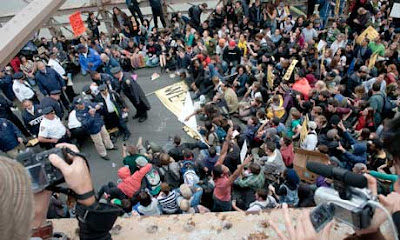 New York, NY—The unwashed crack heads, thugs and mentally ill legions of misfits assembled in our major cities are being funded by ACORN and the SEIU. The got their money from, guess who? You!

The major cities where the sub-human smelly outcasts are assembled and led by Socialist disciples of Barack Obama. Those politicians are aiding in effort to enlarge the protests to unmanageable sizes. This is nothing less than deliberate effort to invite massive violence by overwhelming police resources.

The goal is obvious to start a violent revolution that will bring Martial Law, and suspension of liberty and the upcoming election that would oust Obama.

These pathetic troublemakers can’t seem to verbalize their goals beyond the words on the printed signs they carry. They are simply waiting for their chance at looting, burning and sexual assault. Yes this is only about total anarchy for the participants of the protests.

For Obama and his minions this is simply about an effort to overthrow our form of government, the Constitution and the American way of life.

Americans better choose their side and prepare to lose friends, family members in a massive Civil War. Food, fuel and water will be interrupted and depravation and starvation will visit us until this Communist effort at revolution is put down.

Obama is gearing up for war on Iran and now he’s sent our children to fight in Uganda in a number so small they are vastly outnumber and seriously endangered.

Frankly I can only see Barack Obama as America’s most dangerous enemy. He must be removed, arrested, tried and punished for treason. God help us all.
Posted by Paul Huebl Crimefile News at 10/14/2011 07:27:00 PM

Once the weather cools down, which should be very soon, these assclowns will go away. No one wants to protest when they're freezing their asses off.

Soros is pulling Obama's strings again. The Socialist News Media pours gasoline on this mini fire, in order to make it into a bonfire. Soon, with the Cold Weather coming, it will end, but they will then come up with something else, like sit-in's in government buildings and other warm places. The best thing to do is ignore them, and boycott all the coverage, wait till 2012, and try to vote out the Communist-in-Chief....

yes Paul, Obama probably WILL start WW3, to gain re-election. He is a War-Monger and a Madman, just like his puppet-master, George Soros. Don't think for one moment that Hillary Clinton, and the rest of the Democommies, aren't involved too. It's all about them stealing , taking by force, all the wealth you have earned. Worldwide Communism, WW3, Armageddon, the banning of Christianity, to follow, it's all the 3rd secret of Fatima, the secret the Pope cried when he found out about it,

Don't be surprised when these protesters head for the Subways, after the cold weather gets here, and I don't mean the Sub-Sandwich joints....