Obama’s Huge Libya Victory and What it Means to US 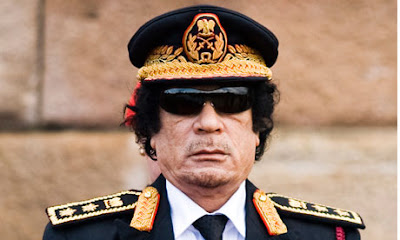 Barack Obama brought us into yet another Mideast squabble, this time in Libya. His mission was to help Muslim rebels remove their dictator, Muammar Gaddafi from office. Okay what did we get? Are we safer? Are we wealthier? Did this somehow produce needed jobs for idle Americans? The answer is obvious we got absolutely nothing.

Obama essentially conspired with Muslim criminals and facilitated the cold-blooded murder of the surrendered dictator. Are Obama’s new Libyan pals going to somehow bring democracy to this country? Are they going to become new and trusted allies in the region? I’m much more concerned with how many planes loaded with innocent people Obama’s new pals will blow out the sky just because they can.

Are the new Libyan leaders going to become drunk with absolute power and the treasury they are already spending? How many scores are they going to settle by filling more mass graves than Gaddafi? We know the answer because it is redundantly written in Middle Eastern history.

Just what did Obama accomplish? Had he bombed Libya into the Stone Age that might have accomplished something. The Middle Eastern Muslim nations are filled with savages that murder, bomb and torture each other as a form of entertainment. They will never become civilized because of any influence from us.

The massive wealth we have unloaded on these oil-rich savages has given us only minimum control over their aggression against the Western nations they hate so much.

I blame the father-son Bush team for doing the same thing in Iraq. Afghanistan could not be tamed by the Soviets and our effort there has been nothing but a waste of our treasury and far too many American lives.

We need to use the oil under our own nation and let the Muslims kill each other all they want. The way Muslims murder their own women in the name of honor makes it abundantly clear to me that Middle Eastern Muslims are not fit to live according to Darwin’s law.

Barack Obama is by far the poorest excuse of an American leader that ever was. He’s a product of America’s new Groupthink. Most voting Americans have demonstrated that are barely smart enough to find their local polling place.
Posted by Paul Huebl Crimefile News at 10/23/2011 09:16:00 PM

Obama accomplished exactly what he wanted. He had the no-fuckin good, but unarmed Quadafi murdered, and now Sharia Law is already rising in Libya. Obama was behind this 100%, just like with Mubarek in Egypt.

we dont have to worry about gaddafi or Libya. Our threat is here already. the Gestapo is in Tennesee rousting citizens ,the TSA and jackboot power tripping Fed backed cops are the danger close enemy.

Old Moammar is dead and those who replace him will probably be worse. Obama spent one billion dollars without authorization of Congress and we’ll probably gain nothing. It is significant to note that Obama violated the War Powers Act and not a single liberal cried wolf. When Bush went to war with the consent of Congress as the Constitution demands they cried bloody murder. Nothing like the hypocrisy of a liberal is there.

Colonel Qaddafi—A Life in Fashion, the same one who had a ghastly ending of his life last week.

In the first link to pic 9 - he has a Robert Downey Jr. flavor. In the second I can see a little Jim Morrison...and in the last a little Prince standing out too much from the rest of the grey crowd.

What it means to US is Sharia Law.