My Take On Conrad Murray and the Trial Evidence. 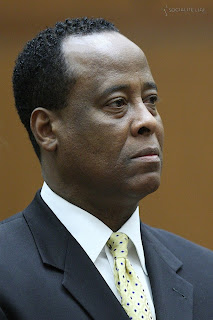 Los Angeles, CA—As the trial of Conrad Murray winds down I will give you my take on this case. Michael Jackson died because of Murray’s negligence and deviation from an acceptable standard of care we expect from physicians.

Saying he was negligent does not suggest he was grossly or criminally negligent.

Murray failed when he left dangerous drugs unattended nearby his patient Michael Jackson that he knew was a tortured drug addict. Jackson would do what’s expected of any addict and that is to recklessly self-administer drugs.

The jury here has to guess who administered the fatal drug dose. We must assume that Jackson wanted the drug that killed him and used an opportunity created by Murray’s negligence to consume what became his poison.

Murray should be disciplined by his peers on the medical boards where he practices medicine. Murray should have deal with the allegations of negligence and medical malpractice in a civil court.

From a purely technical point of view Conrad Murray should be found Not Guilty of any crime.

On a side note this case should not have been televised and the jury should have been sequestered.

"Saying he was negligent does not suggest he was grossly or criminally negligent."

Yes it does.What doctor takes
Propofol outside of an OR or ER????This isnt the type of drug you use for house calls.

If there is some doubt as to whether Michael Jackson took some extra drugs along with propofol that he had already been given, then all Murray is guilty of is allowing himself to administer propofol outside of
a hospital and negligence to Jackson his client...,

Plus Murray was also negligent to himself, by not leaving the bad scene, and or giving his client over to a different group of professionals, until it was too late, which then embroiled Murray alone in that bad scene, which was not entirely of his own making.

And Jackson was already an incurable drug addict- before Murray arrived on the scene to become his full time doctor and drug deliverer.

And Murray had no intent to kill Michael Jackson which is proven because as soon as Michael would die so would Murray's cash flow.

Thank you for this.

I think that Jackson killed himself that day. So much was riding on his comeback tour. He was being asked to deliver a standard of performance that he was no longer able to give.

He was getting scared.

I believe he had his exit plotted out to the nth degree. His tolerance to the drug was by then, very high. It would take a lot to get him gone, more than the doctor would give even with all the fits and threats.

Not every shut eye is sleep...
I am wondering now if Jackson would fake sleep just to see what Murray would do. Does he leave the room? If so, for how long? Where does Murray stash the goods? Is he sloppy in how he handles the meds?

He had to time this just right; get enough advance before anyone knew he was gone. His death would release him from the contract and the pressure of the tour. His stock would go up in terms of music sales. His children would be provided for.

He took the moment and took the trip. He had warned his daughter that he might not make it to see "Fathers' Day."

In his marble loneliness..what if any are his regrets?