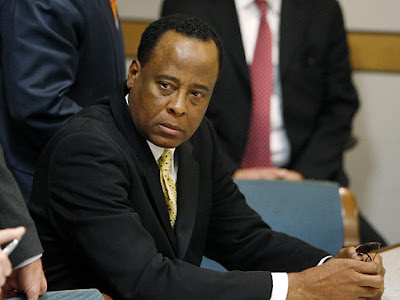 Los Angeles, CA—We are all used to seeing videos and hearing audiotapes of suspects being grilled by the police. The suspects squirm, lie or give investigators information that helps them foreclose on the suspect’s defense options. You never see defense lawyers present during these interrogations because they would never allow that to happen.

We live in a great country that gives us all an absolute right not to answer cop’s questions. The reality is only a tiny percentage of suspects are savvy enough to keep their mouths shut and ask for a lawyer.

Conrad Murray actually had a lawyer who offered his client up for a police grilling. This mistake is beyond jaw dropping in its effect on criminal lawyers everywhere. The jury is about to hear prosecutors play the interview recording as his red-faced lawyers have to deal with the blunder.

There may be a slightest benefit for Murray in that the unsworn testimony he gave investigators may make his taking the stand during the trial unnecessary. The defense attorneys can tell the jury, “You’ve all heard what Dr. Murray had to say.”

I’ve yet to hear the interview or read the transcript but if it wasn’t damaging the state would not be using it against him. My question is if his lawyer simply gagged Murray would they even have succeeded in indicting him?

The truth is if every suspect was able to take back their statements to police the jails and prisons would be nearly empty.

We live in a police state and talking to them can even cost you your life even if you are absolutely innocent.
Posted by Paul Huebl Crimefile News at 10/07/2011 12:45:00 PM

Paul, you're so right about that interview. It was a game changer for the LPAD who would spend many months doing noting more than disproving everything Murray said. It made indicting and convicting him much easier. Murray's lawyers practice lad as bad as Murray practices medicine.

I hope lawyers would aware this problem and should be acted as a professionals.

Talking about laws are very broad. But you need to know the basic laws especially to defense yourself or else find a criminal defense lawyer in your area. I guess, this book was written by Hank Fisher would also help us in many ways in terms of defense.

Inconsistencies in statement is one of the things that can make a suspect guilty of crime even is the accused is innocent, everything he says can be used against him, even simple slip ups in statement.

Policemen should need to do their job and investigate well and let the innocent will be free and the criminals would be in jail.