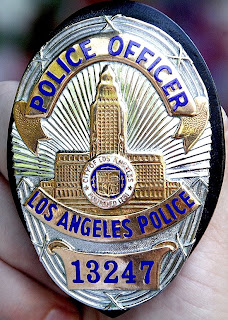 Mentone, CA-- San Bernardino County Sheriff’s officers stopped off-duty LAPD sergeant Lucien Archie Daigle, 44 after a collision early in the evening of Oct. 23. The sergeant reeked of pepper spray and there were burglary proceeds in his car that were in plain view.

It was moments earlier a yet to be identified woman came home to burglary in progress. The woman went on the offensive and used some very potent pepper spray on the burglar who fled the scene.

Daigle was detained just a few miles from the crime scene. There is no know connection between the burglary victim and Daigle.

Deputies transported Daigle to a local hospital for minor injuries sustained in the collision and brought him in for routine booking. It was during the booking process that they learned that Daigle was a LAPD sergeant.

Daigle was released on $125,000.00 bail. The LAPD placed the veteran officer on administrative leave pending investigation from his position. Daigle worked in the Wilshire, Central and Olympic Divisions of the department.

Sergeant Joe Friday is rolling over in his grave today...

Bail = Ineligible
Released to Self
WTF????

There has to be more to this story? Do you know what it is Paul? Let us know please!!!

Believe me when I say I agree. I want to get to the bottom of this despite the information blackout. They must have served search warrants on his home, storage facilities and computers. There must be some link and you know they will be checking his LAPD computer inquiries.

Sounds like the kind of "police officer" we could use in New Orleans. H'd fit right in with the rest of the force.

Maybe he is LAPDs William Hanhardt

William Hanhard was a master cop turned master criminal. He was no residential burglar! Hanhard targeted jewelry salesmen’s cars with a very clever scheme using his position to get duplicate keys to his victim’s cars. Hanhard delegated the actual crimes to others in his cohorts.

There is a fine line between a criminal and a cop!

If anyone learns of the address or the name of this lady doctor victim, please privately email it to me. I’m going to contact her and offer her a FREE ten hour NRA certified course (and some), along with a Calif DOJ HGS gun card. She needs to get a gun and know how to use it if she doesn’t already.
http://hi-caliber.blogspot.com/2009/02/firearms-training.html

For being a "High Caliber Private Investigator," I'm surprised you're seeking help to find out the victim's address and personal information. Kind'a oxymoron doesn't it?! She thwarted a highly trained LAPD Sergeant, soon to be convict, with a Grizzly Bear potent Pepper Spray and won! Sounds like she can handle herself very well...

Three home invasions burglaries in the same track in the last twelve months, what are the odds. There is a link