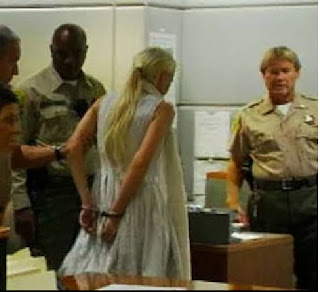 Los Angeles, CA—All accused Americans have a right to be released on reasonable bail when they are accused of crimes. Bail is granted with two specific issues, the first is concerns the likelihood of the accused to appear in court or flee. The second issue has to do with the protection of the public from any danger posed by the accused.

California's bail bondsmen have a heavy lobby and nearly always get whatever they want from lawmakers. Bondsmen have more power than cops over the people they service. Bondsmen need to be put out of business and the courts accept that responsibility.

With bondsmen they take and keep ten percent of the bail automatically. Lohan had to fork over $10,000.00 cash in order to be released from jail pending her hearing. That’s money straight into the sewer. Many defendants are forced to use taxpayer provided public defenders because they have nothing left if they are able to post bail. That’s horrible public policy.

Jurisdictions like Illinois rid themselves of bondsmen, requiring defendants to post ten percent of the bail with the court clerk. Provided the defendant appears the ten percent is returned to the accused. Lawyers can have those bonds pledged for the services saving taxpayers a bundle. The rate of bail forfeitures is not greater in Illinois than California.

I have a huge problem with Lohan’s bond. The first is that Lohan does not miss her court dates always showing up with a lawyer. We know for sure she will appear. The other is that she has no history of violence and any public protection concerns don’t exist. Why then, must Lohan be forced to post $100,000? Is there some judicial corruption involved here?

Simply put, Lohan should have been released simply on her promise to appear. Judge Sautner’s enriching bail bondsmen does nothing to further the administration of justice or the presumption of Lohan’s innocence.

We don’t have room in our jails for dangerous convicted criminals but we make room for people simply accused of non-violent crimes. Someone please tell me what that’s about.

All I ask for is some simple common sense but cannot find any in the California court system.
Posted by Paul Huebl Crimefile News at 10/19/2011 12:18:00 PM

We don’t have room in our jails for dangerous convicted criminals but we make room for people simply accused of non-violent crimes. Someone please tell me what that’s about.

They say there is celebrity justice in California because of the OJ case etc.

But I only see California Justice as a way of fleecing the rich and sticking it to them and torturing them in the lousy process.

and for the poor - who have no money - it is excessive force from a nasty Governmental bully.

And as far as the California and Federal Courts - there is a Devil in the Delay. THE DEVIL IS BUILT INTO THE SYSTEM.

IT ONLY BENEFITS THOSE THAT WORK IN IT.

The California Justice and the whole system STINKS - what with County of Los Angeles Sheriff Deputies beating up people in prisons for no reason other than for vicious pleasure...

Jesus Christ! My God, I know you have a fixation on her but c'mon. She has screwed up so many times she deserves what she gets.

Lindsay Lohan did screw up. She does not deserve more punishment that any other person but she gets it in spades. Had that been any ordinary defendant in Judge Sautner’s court, that hour long hearing on national television would have only lasted ten minutes. For God’s sake this is only a misdemeanor!

You can "thank" MADD for the "Big Money Grab" that is going on in law enforcement today. It's ALL about the money folks, always has been, always will be. Safety issues, hah, LEO's do not give a rats ass, show me the money!!!