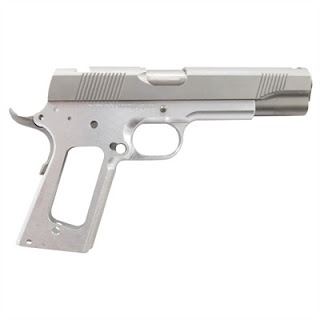 Making guns is now a bootlegger’s dream come true should banning efforts somehow continue despite the trend of rolling back decades of restrictive gun laws.

There was a day when making a gun required sophisticated machining skills, special knowledge of firearms and a lot of time. Most firearms made by ordinary machinists were very simple and not very desirable. Because of the computer revolution, minimal skills are needed today just a common CNC machine to make nearly any firearm.

Any business engaged in manufacturing metal parts has the equipment. The recipe and plans for making quality guns are simple computer programs that are all over the Internet!

You simply obtain the correct metal materials, program your machine and you’re a gun maker. If you really want to shake up the world of gun laws, regulation and registration making exact knock offs of existing products would be entertaining to say the least. Stamping serial numbers that reflect guns transferred through legitimate channels would put some politicians and bureaucrats into a seizure!

Making counterfeit working firearms is easier than counterfeiting money by far. The only reason there aren’t millions of bootlegged firearms out there is the gun bans have fallen everywhere in America.

What people don’t realize about Afghanistan is that this nation was the number one gun maker in the world specializing in quality knock off firearms even before computer ever existed.

The government will be able to control bootleg gun makers about half as well as illegal marijuana growers. Machine shops are everywhere and it is nearly impossible to regulate what they’re making especially in-between making lawn mower parts and such.

The only cure is to make sure the majority of well-behaved Americans are well-trained and armed to keep the criminal minority in place.
Posted by Paul Huebl Crimefile News at 10/23/2011 09:05:00 AM

The TDP(techical data package) for the M16 series of weapons has been floating around the industry for years.Everybody and their brother is making AR15 upper and lower receivers.

The price of CNC (Computer-Numerical Control) machine tools has dropped to the point where any middle class hobbyist/terrorist can afford one. 3 axis milling machines that can carve a gun receiver out of a block of steel in an hour or so are about $4,000. Even less if you buy one from a bankrupt business. 20 years ago it was a 1/4M$.

The only saving thing is that the high schools don't teach machine shop any more so machining is a dying art/skill.

..and on the CNC comment: The AK-47 was conceived as a low tech, easy-to-make simple firearm. The SN's in Afganistan make the barrels out of old car axles using a hand-operated reamer.

Estimates are that 50,000,000 came out of real factories. And no one knows for sure how many have been made in the back alleys of Iraq, Iran, Pakistan, Afganistan, Laos, Viet Nam, etc. Maybe another 50M..

Nice image shown in your clog.Tell me about TDP more.