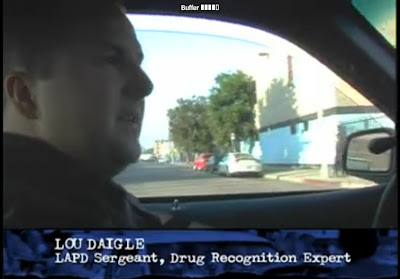 Los Angeles, CA—L.A.P.D sergeant Lucien “Lou” Daigle, 44 was a well-respected cop whose world has crashed over a really frightening and despicable act. He was arrested for residential burglary at an upscale Mentone, CA home where he was nabbed, literally red-handed.

During the evening of Oct .23rd, Daigle was reportedly caught in the act by a homeowner while clinging to her camera equipment and other poroperty. When he pursued her, she was fortunate enough to have some powerful bear repellant spray she emptied on the home invader.

The off duty cop fled in his car only to be involved in a nearby collision. I can’t imagine what might have happened had the quick thinking victim not used the spray. At least Daigle did not try to involve or present a gun in this encounter.

I have done some preliminary examination of Daigle in an attempt to determine his need to commit such a desperate crime. When cops go bad it usually involves crimes related to police corruption. Residential burglary is really too lowbrow and repugnant even for a criminal with a badge.

Daigle pictured above is married to an attractive African-American woman and has six apparently well-adjusted children. Daigle, his wife and children live in a spacious home and they seem to have found the American dream.

Like nearly every cop Daigle has some secondary employment. He is a licensed real estate salesman and he operates a business related to buying and selling gold. We know the real estate market has tanked. Raising a large middle-class family is a financial challenge for any cop.

Daigle enjoys photography and has encouraged his children to compete in the entertainment and modeling world. He and his family are members of and regularly attend a local church.

Outwardly at least Daigle casts an image of a happy and decent family man with huge responsibilities. Perhaps like many Americans he is upside-down in his mortgage and his kids are growing into the age of needing cars and looking for college funding. Has this cop turned to burglary to make ends meet?

Today the question of Daigle’s involvement in additional burglaries and crimes are heavy on the minds of investigators. Just how dark is this newly discovered side of Lou Daigle? Just how dangerous is this man?

The homeowner that surprised Daigle in this reprehensible act is understandably frightened and refuses to stay at her home. The psychological trauma caused to this woman is beyond the pale.

We will have to wait and see what investigators uncover before we can guess what the penalties will be. Lou Daigle’s future is grim since legitimate job opportunities for convicted burglars are nearly non-existent. Despite seemingly overwhelming evidence, Daigle is still only a suspect right now and has the absolute presumption of innocence. We will have to see how this plays out in court.
Posted by Paul Huebl Crimefile News at 10/28/2011 06:25:00 AM

This is a rather stunning story. I suspect the end of the story is not going to be about a dad with an upside down mortgage as much as it will be about a man with a dark side, a desire for power, and a love of secrets. As you say, he is presumed innocent at this point. But the facts you've presented here do not look promising.

hey Paul, I dont think it is stretch.all the cops in chicago are truck loaders.I used to see them pick up the stuff that fell off the back of the trucks all the time

Hes a typical cop.Thinks he is above the law and a higher life for.He desperately craves attention and thinks he is a rock star.He is a white shirt and has worked(s) specialty positions so he is politically connected.

His cop salary cannot feed his champagne and caviar tastes so he hits the streets to make the green to impress the star gazers and badge bunnies who love his BS war stories.

Paul..Why do you let these assholes write this stuff???

What I really want is to see a relevant exchange of reality and ideas. I don't think anyone can do much but to lament this thing happened. Nobody ever talks about the cops with real cases of Post Traumatic Stress Syndrome they develop on the job.

This story shocked me personally and we need to deal with this in a positive way. Please offer anything constructive.

This happens all round the world, and here in the UK trust of the police force is falling as more cases come to light - from burglary and drugs to beatings and the (thankfully) occasional rape and murder.

When you consider that policemen are supposed to be the law, when they think they are above it is when the problems occur.