I Love My Country but I’m So Ashamed of It… 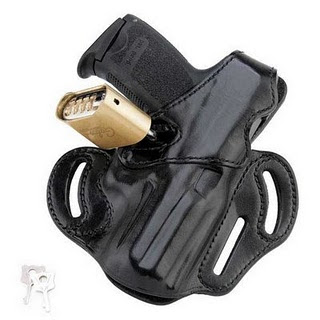 Los Angeles, CA—I sadly watched the 9/11 memorial gatherings and watched politicians and their bureaucrats cashing in on some TV face-time. It’s downright disgusting to imagine we have become such a cowardly nation in the last few decades.

The holster you see above for those that don’t know, it is the required Federal Flight Deck Officer’s holster adopted by the TSA. If it looks useless, you’re right it is. That holster represents a symbol of the new America to me.

I somehow thought after 9/11 we were going to be strong and united in our resolve to protect the freedom that has made America the envy of the world. I expected that we’d go and simply bomb Afghanistan back into the stone-age rendering them harmless while setting an example for the entire Muslim world.

Instead we took the fools-way out by surrendering our liberty and we have created a new and even more powerful government in Afghanistan. We did this with the members of a hateful and bankrupt culture that unilaterally rejects everything Western. We are also doing this in Iraq and now Libya. They will be soon using our own weapons we’ve foolishly provided them against us.

We began a Homeland Security program to rival the Gestapo and Stasi complete with an identical snitch policy. Instead of targeting the proven terrorist demographics, Homeland Security has shifted its focus to Conservative White, middle-aged males that don’t support the current Whitehouse Administration.

My fellow Americans dutifully line up for the human underclass hired by the TSA, just like frightened sheep. Half are unreasonably afraid of terrorists and the other half are too intimidated by the TSA to complain. Some Americans really believe we can’t be safe without first being made miserable and being excessively groped by the TSA swine. This is such a sad state of affairs.

We gave our politicians a blank check to our bank accounts to fight terrorism. Instead we got the absolute corruption that plunged a once healthy nation into bankruptcy.

We have embraced political correctness beyond the point of silliness. We have turned this nation into a pretty lousy place to live and raise children.

Yes, I will hang my head in shame until the brave, working men and woman seize America from the criminals, cowards, Communists and other evil agents that have taken control of our government.
Posted by Paul Huebl Crimefile News at 9/11/2011 03:34:00 PM

The weapon in that holster is about as useless as tits on a boar Paul. Kinda reminds me of our elected officals. The American people HAVE become sheep, programmed to believe everything the government tells them. As I said in an earlier post, IF law-abiding citizens had been allowed CCW just maybe 911 would not have happened!!!

That holster idea is one of the dumbest things I have ever seen. I will never understand why the FAA has a problem with arming the flight crew. What do they think they will do, hijack the plane? This kind of boneheaded response is what you get when liberals are in charge. They think with their feelings and don't want to offend anyone instead of using common sense. If I were in charge, there would still be security at airports but the only people that would be getting stopped and frisked would be those who fit the profile of today's terrorists, along with anyone else who was suspicious. One thing I know is that elderly grandmothers wouldn't be searched down to their Depends.

I always remind my friends, soon there will come an opportunity to change this at the cartridge box, not the ballot box. Do you know where were your politician is tonight?

America has become totally pussified [liberalized]. Most Americans are afraid of Everything, especially guns. They SHOULD be VERY afraid of the Tyrannical Extremist lefty Politicians who want to disarm us ALL, more than they should be afraid of actual firearms themselves.