John Wilkes Booth Came to the Aid of his Country 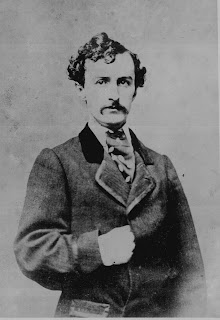 Washington, DC—He was labeled as the devil but was he really just an American patriot? One thing for sure John Wilkes Booth (May 10, 1838 – April 26, 1865) was the victim of so much revisionist history by writers with an agenda to wrongfully canonize that despot, Abraham Lincoln as a saint.

We all know this 27 year-old prominent stage actor ambushed Lincoln at Ford’s Theater. Unlike the others that either assassinated or made attempts on the lives of our presidents Booth was no deranged loser. He was bright, popular and talented. Booth was driven by the massive suffering of a struggling of his nation that was trying to break free from a brutal Union.

The revisionists all want to sell us that bill of goods that the Civil War was all about slavery. Slavery was on its way out for a multitude of reasons especially with the invention of the cotton gin. Cotton growers needed more people to pick cotton but slavery was actually much more trouble than is was worth. Hiring freed slaves as cheap labor was certainly a better alternative. They had to feed and house the slaves anyway. History shows us that after the slaves were freed many thousands opted to continue on as employess of their former masters. Soon more advances in technology stole most of the cotton worker's jobs.

The war was really about iron fisted Union rule and later the sudden suspension of the Constitution by a lawless Abraham Lincoln. The real issue was one of state’s rights for local control. The Lincoln Administration was un-American and monstrous as they shut down newspapers and simply jailed their critics without trial.

Back then slavery not withstanding Americans enjoyed freedom like never before. Union corruption and political greed became a serious threat to liberty as an ever increasing federal government stepped up their tyrannical rule. The southern states resisted the tyranny and the result was a total bloodbath when the North began to punitively deal with the resistance.

I’m one of those that believe that the war was completely avoidable by the Union simply respecting the rights of the states. American people could vote with their feet and every state would have to compete for and attract the most productive citizens.

Waging war on secessionist states brought unparalleled carnage and finally the cruel and sadistic burning of the south by Union troops. This savagery scarred the very soul of sympathizers like Booth.

The plot to kidnap Lincoln went wrong and killing him was much easier than taking him prisoner. Booth is only guilty of doing too little too late. Killing Lincoln was more of an act of revenge because the war seemed to be over and Union dominance would continue.

Was it really booth that was shot in that northern Virginia barn? Did they foolishly trust the identification of Booth by his surviving family members? Identification of another man’s corpse would certainly insure the escape and survival of this proud southern family’s now infamous son.

The troops had strict orders to take booth alive. Had they obeyed orders, I wonder what grotesque torture they would have used on Booth in order to pry the names of his co-conspirators out of him?

The Union needed closure and heralding the death of booth along with that sham military tribunal to cinch the killing of every arrested conspiracy suspect gave them what they wanted.

In the end Booth acted for what he knew to be for the good of his country.

Where is Booth when we need him?

As much as I would love to have a Booth today, we can't afford Booth now, don't want to make the current one a martyr. It would be the LA riots or Katrina all over again but on a nation wide scale.

If we can't impeach and hang him for high treason (which he deserves), the next best thing is to let the current one continue to make a fool of himself and then drop in to the dustbin of history like so many have done before him (e.g. Clinton's, Gore, Carter, etc..).

You have to admit at this point though that it is better that there is ONE United States of America rather than two medium sized mostly friendly countries-----USA & CSA.

It would have been far better to have a Union without Lincoln that would have recognized state’s rights without a total bloodbath.

The multi-generational living on welfare state and the blacks blindly supporting the Democratic party and vice-versa are nothing more than the modernized version of the antebellum plantation.

The smaller South was paying 75% of all federal taxes. The final straw was the Merrill Tariff, which was placed on Southern ports only. Fort Sumter was a customs house. Coincidence?

The robbing by the federal government of Southerners of their legally owned property - slaves - owned under laws codified, enacted and supported by majorities of Northerners, including but not limited to Northern slave traders and owners, was the first and greatest step in the ongoing forced march into servitude of the American patriot.

Paul,
The chickenshit American "Conservative" refused to post the longer comment of which my post yesterday was a part. What a gas to see that you are on to this topic at the same time as me, and that you are not fooled by the official line. Your post on Booth would definately have been spiked by them. If you want to read their article, it's "Harvard's Civil War", August 23. My comment is under the name EyeOnMadisonStreet. I think I make some good points in my rebuttal to "Patrick". I'd be delighted if you want to use all or part of what I wrote there, and, in fact, I will stand up and put my real name to it.