The TSA Needs a Terrorist Attack for Better Public Relations 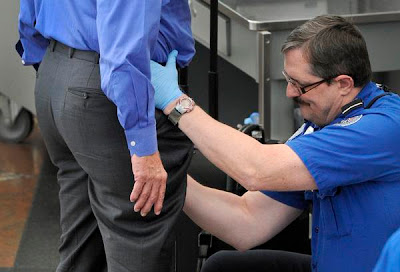 Washington, DC—The greatest tool used by enemies of freedom and liberty is fear. The entire concept of searching airline passengers like criminals was sold through simple fear-mongering.

Adolph Hitler and his National Socialist Party wanted absolute power in 1933. There was a convenient arson caused fire in the Reichstag building in Berlin. The Nazi’s quickly blamed it on their political opposition. The Nazis used fear to get the absolute power they abused for 12 years causing the needless deaths of 50 million people.

In Berlin across the street from the Reichstag building was a residence for Hitler’s pal, Herman Goering. That building still stands by the restored Reichstag. Just below the street is that troubling tunnel, still in existence today that gave the Nazis easy access to set that fire!

The TSA has had lots of failures and has never once stopped a terrorist attack despite thousands of employees and billions of tax dollars. The TSA exists only because of fear pandering. The TSA has become the biggest terrorist organization in America. That as TSA screeners, threaten Americans with imprisonment and fines over children’s sippy-cups and old lady’s knitting needles.

The TSA and our Fourth Amendment in the Bill of Rights cannot co-exist. The TSA has frightened the flying public into absolute compliance of every new insult to their basic privacy and dignity. They have actually convinced gullible Americans that without the TSA and the police state we’d all be dead.

The concept of balancing freedom with security has become nothing more than an excuse to eliminate freedom. Either you’re free, or you are not. The privacy invasions, unlawful searching and bulling have zero effect on terrorists. If terrorists are somehow convinced that hijacking or blowing up planes is too difficult they’d just pick softer targets.

I was reminded by a commercial pilot friend about something I’ve known since the day it happened. Trans World Airlines Flight 800, a Boeing 747-131, exploded and crashed into the Atlantic Ocean near East Moriches, New York, on July 17, 1996.

Our government and media has lied to us in an effort to deny the terrorists that shot it down with a surface to air missile the free publicity and credit they sought.

Government workers pressure washed every part of that plane they recovered destroying the evidence of the missile strike. There were credible eye witness reports from pilots and boaters off Long Island, New York that saw the missile. The weather conditions that night were ideal for safe flying.

The Boeing 747 has been used for some 40 years and millions of flights everywhere on this earth. This reliable aviation workhorse has never simply blown up on its own before or since flight 800. I don’t think you will find a single commercial pilot that accepts the notion that it was anything other than a surface to air missile that brought that plane down.

Terrorists embrace and thrive on publicity. The Flight 800 cover-up by our government and a cooperative press denied the terrorists what they wanted most, publicity. They learned quickly that missiles don’t get them the credit they deserve.

Terrorism and crime is in every society from the nastiest police states to those nations that brag about their freedom. Whatever roadblocks we try to establish to stop terrorism the terrorist easily find ways around them. The enemies of freedom will always promise safety in exchange for your hard won freedom. Only a fool will believe that baloney.

The only way terrorist acts have ever been thwarted in the world has been by vigilant ordinary citizens that recognized what was happening and intervened. Creating the nastiest police state will do nothing but destroy our quality of life.

Suggesting that Americans can find alternatives to flying is a ridicules statement. The TSA has taken over our railroads too. The TSA is as evil as any terrorist.

Today the TSA bureaucrats would like another nasty airplane attack to justify their existence. They need it to keep frightening Americans into surrendering even more freedom.
Posted by Paul Huebl Crimefile News at 11/18/2010 06:28:00 AM

There were a couple of TSA hanging around our local Metra station in the Chicago suburbs this morning. How long until law abiding citizens are randomly pulled out of the crowd and made to submit to a humiliating pat down in order to board a train? I would certainly refuse a pat down and drive downtown instead.

‘Enough is Enough’ Ron Paul Calls for End of Federal Government Criminal Activity
This TSA legislation will curtail abusive violations of Airport security and Freedom to Move and Travel without Fear and Terror of Government molestation.
The Simple one paragraph piece of Legislation, looks to do this by removing the current immunity of any agent or officer of the federal government from doing anything that you or I couldn’t do. Namely removing Immunity that the Federal Government Agents enjoy in committing what would normally be Crimes.
(full)
sovereignthink.wordpress.com/2010/11/19/enough-is-enough-ron-paul-tsa-bill/