Judge Threatens Blago and his lawyers! 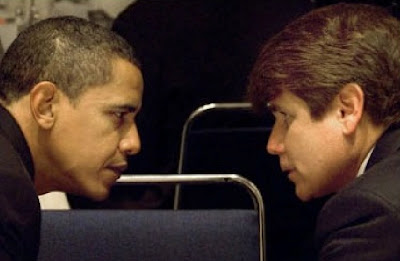 Chicago, IL—Today federal Judge James Zagel threatened former IL Governor Rod Blagojevich not to in anyway implicate or suggest that Barack Obama and his inner circle were not called by the government for nefarious reasons. The judge told defense lawyers, “If you start down that path, you will regret it.”

The defense sought a “missing witness” jury instruction on the likes of Barack Obama, Rahm Emanuel along with political fixers, Tony Rezko and Stuart Levine. The defense wanted the jury to be told the government did not call those witnesses because it would have hurt their case.

The whole trial surrounded Barack Obama’s senate seat. It’s no secret that Obama wanted it filled by his friend Valerie Jarrett who is a Senior Whitehouse Advisor today. The defense was never allowed to explore or expose that crucial part of the story or call witnesses inside the Whitehouse.

Judge Zagel will be expecting a Presidential elevation to the Seventh circuit court of Appeals for his helping the Whitehouse cover-up their dirty laundry. That is after all the Chicago way.
Posted by Paul Huebl Crimefile News at 7/23/2010 07:31:00 PM