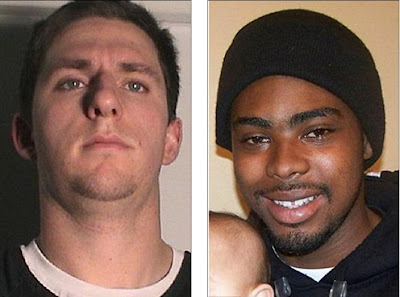 Los Angeles, CA—The jury is out deliberating on murder charges against a young White transit cop over a fatal incident at the Oakland's Fruitvale station. A young African-American wanted to hold court on a transit platform while resisting arrest. The offender, Oscar Grant, Jr. was putting on a show for his friends who were recording the altercation on their cell-phone cameras.

Fighting police is risky behavior that serves little purpose and only makes things much worse. Holding court in a courtroom instead of the streets is always a better idea, but the show for Grant’s friends had to go on.

This time something went terribly wrong and the young cop grabbed his service pistol instead of his electronic stun gun. Instead of lighting up this street performer with electricity he let a round fly from his .40 caliber pistol.

Was it an intentional act or an accident? That’s what the jury is trying to determine. To arrive at an answer the jury would have to either follow the reasonable doubt standard and free the cop or read the tea leaves and convict on a psychic guess.

If the jury either acquits or hangs on a split vote Oakland’s thugs will be out in full force. Perhaps with enough media coverage the violence can spread across the country. We may be finding out just how racially divided we are.

A race riot would not be about Oscar Grant or the young cop, but about the big picture of a divided America and opportunistic thugs waiting to burn, rape and plunder.
Police in every community with a large African-American population within California are bracing for the worst. How many innocent people will have property destroyed, be injured or killed by thugs using this verdict as an excuse for more senseless violence?

Of course after the shooting there was a pretty nasty riot in Oakland. Too bad the thugs did not get it out of their system.

Frankly I don’t see a basis for a conviction. This is a case that should have been settled in a civil rather than a criminal court. Negligence is much easier to prove there than any criminal court.
Posted by Paul Huebl Crimefile News at 7/05/2010 02:34:00 PM

Certain people need only the slightest reason to riot. All they do is bide their time and wait for an excuse, any excuse, to act like fools and destroy other people's property. If the police officer is convicted, they will riot in celebration. If he is acquitted, they will riot in defiance of an injustice, or some other bullcrap excuse. Bottom line, they just want an excuse to destroy something.