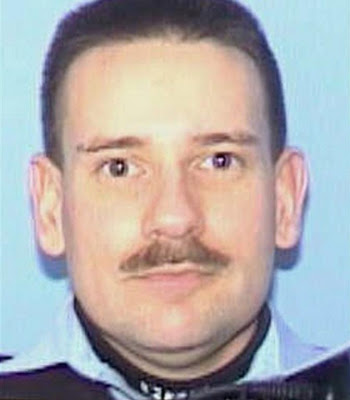 Chicago, IL—Thor Soderberg was a police academy instructor currently assigned to deal with South side Chicago gangs and violence. Late this afternoon while leaving a police building a local thug snatched Soderberg’s service pistol and shot him in the head killing him.

The offender attempted an armed robbery nearby with the gun and was shot and wounded by other officers. The suspect has non-life threatening wounds. The yet to be identified thug reportedly has an extensive criminal record of mostly drug related crimes.

Soderberg leaves a wife and many friends who are devastated by this despicable and cowardly and racist driven act.

My thoughts tonight are with departed role model, his family and friends.
Posted by Paul Huebl Crimefile News at 7/07/2010 09:22:00 PM

I am just so very disgusted right now

Hey is this killer one of the bad people Mayor Daley's useless gun laws will protect us from? How about the Cook county ASA's do their job for once. This piece of garbage should have been in jail for shooting his brother a few years ago. Ted Kozak rots in prison and this piece of human garbage was free to roam so he could kill a good cop.

Tell this one to my widow:

Mayor Richard Daley on Saturday dismissed the notion that his administration’s failure to make good on a pledge to hire more police is affecting public safety, even as Chicago combats growing violent crime.

"No, no," said Daley when asked about the lack of new hires and the impact on city safety. When pressed, Daley bristled and said "It just won’t."

The mayor said he's "working on" hiring more police officers, but didn’t have a time frame for when that would happen.

Daley's brief comments were the first he has made on the issue since the Tribune reported Thursday that the Chicago Police Department is down hundreds of officers due to retirements and other attrition. Police Supt. Jody Weis promised aldermen that he would expand the force by 75 officers as part of a move to get more cops on the street.

Daley, who refused to answer questions on the issue Thursday and Friday, cited dropping revenues as the reason for the hiring delay.

"It's simple, we have an economic crisis...we have to look at this in a four year financial plan, we're not going to be irresponsible," said Daley, who compared the crises that the city and country are grappling with to the financial problems faced by Chicago’s two newspapers.

"All you guys are going to get laid off," said Daley, laughing. "You have an economic crisis, you have a debt you have to figure this out."

Daley has said the city must reduce personnel costs in the face of the worsening economy and a gaping budget hole, but has not specified where the cuts could be made. His remarks Saturday came at a ribbon-cutting ceremony in Uptown for a newly built playground at Stewart Elementary School, 4525 North Kenmore Ave..

Monique Bond, spokeswoman for the Police Department, said last week that Weis is still committed to hiring as many officers as he can but said the department is not the only agency in the city facing budget challenges.

WHERE THE FUCK IS THE "SO CALLED UNION" FOP???

IT IS TIME TO MARCH!

This officer died because cops, like everybody else now, have been bludgeoned into accepting blacks’ thuggishness as unavoidable and understandable – indeed, excusable. To make the fatal import of this facet of pc enforcement a little clearer, suppose a realistic police self-protection policy were to be enacted: in neighborhoods with high rates of violent crime, require officers to stand guard, weapons drawn, in all situations where they might be exposed to attack. How long would it be before the howls of outrage by blacks and liberal whites compelled the police to use the same aggressive tactic in neighborhoods where the worst thing that is likely to happen to an officer is getting poked by his car door? What the police are forbidden publicly to acknowledge, that blacks routinely attack police, especially white police, while whites rarely do, is what has cost this officer his life.

Instead of sweeping the streets of anyone engaged in lewd or disorderly conduct as was done in former times, the law-abiding are commanded to stay indoors while the lewd and disorderly are allowed access everywhere, up to and including police parking lots. Sam Francis's Anarcho-Tyranny cannot be demonstrated in starker terms.

Meanwhile, while the fallen officer is being gushed over for his community service, (which he deserves, but that's not the point) it goes unnoticed by the carefree and clueless white residents of Chicago's lakefront and bohemian neighborhoods - the same people who have blithely turned Daley into mayor-for-life - that the facility where the murder took place, once a regular police station, now houses Targeted Response and Gang Enforcement units, i. e., large bureaucracies within the police department dedicated to chronic crime and serial outbreaks of crime, otherwise known as crime waves. While a law-abiding citizen who displays a handgun will be branded with a felony arrest - a career-ending event for most people, real career criminals, and the mere savages who commit crimes simply because it feels good, are given special treatment, to negotiate and camouflage the problem rather than eradicate it.

What can one say about a race of people who have been richly rewarded by this society as a matter of policy, when they have demolished most of our once great cities, mass murdered over a quarter of a million white people since the 60s, have left 40 million white violent crime victims in their wake (murders, rapes, robberies, beatings, car jackings, home invasions, etc.) in that same span, and have left a massively negative influence on society at large.....?