Blago’s Lawyer Made A Fool of Judge Zagel In Court 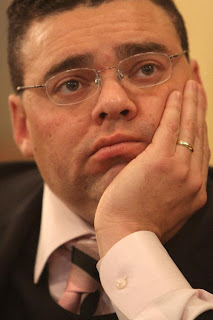 Chicago, IL—In the otherwise boring but high profile trial of former Governor Rod Blagojevich great pains were made by prosecutors and Judge James Zagel to protect every member of the Obama Mafia from exposure or attention. I can’t help but believe there are sinister motives behind Zagel’s rulings.

I saw an incredibly cleaver move by the feisty Sam Adam, Jr. who proved to be a legal clone of his legendary father.

Frustrated by the constant over-protection of the Obama Crime Organization and convicted criminals associated with those Whitehouse occupants, Adam found a great solution.

Adam wanted to jury to know that he was not permitted to bring in or examine the Whitehouse Mafia members. Adam wants everyone to know they’re being protected for nefarious reasons. Judge Zagel put his massive foot right on Adam’s throat threatening him in the process.

That got major press attention. Adam is no fool he ran with that football for a major touchdown by suggesting he’d go to jail if necessary to inform the jury. The press bought into this slug-fest and it was the top story of the entire trial.

The jury here has not been in a vacuum and contrary to instructions can’t really avoid media reports especially when they involve material they were not supposed to hear.

Adam accomplished his mission by using Zagle's considerable weight against him. The jury did hear that the Obama mafia has escaped any and all scrutiny and the jury has been denied hearing all the evidence. This is a great reason for a juror backlash and perhaps even an acquittal.
Posted by Paul Huebl Crimefile News at 7/29/2010 02:56:00 PM

Email ThisBlogThis!Share to TwitterShare to FacebookShare to Pinterest
Labels: Blagojevich

Our State and Federal Criminal Justice Systems are Corrupt to the Core. Justice is trumped out according to political power, and political correctness, Crookago, Illinois Style, everywhere now. Our Country is Doomed.

I wonder when the whole truth will finally come out on (1) the whole Blagojevich fiasco, and (2) Barack Hussein Obama.

Blago is no choir boy, but he has become the fall guy for the entire Chicago - Cook County - Springfield - Washington, DC corruption connection.

Paul:
I agree with you that blago's trial protected Obama; no Devine and no Resko was proof enough. i have a feeling Blago beats the case or is only convicted of two charges.