Another Chicago Cop Murdered In The Englewood Combat Zone 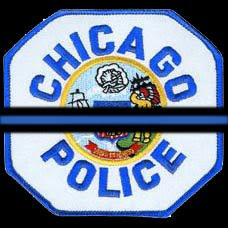 Chicago, IL—It’s long been a neighborhood ruled by thugs enabled by Mayor Richard M. Daley’s long standing gun ban. The 7th Police District is a combat zone and scene of multiple shootings daily. When they are not shooting they’re stabbing and beating each other in this neighborhood filled with horrible wild savages.

For police unfortunately this ghetto is steadfastly in an, us or them hateful mentality. The African-American inhabitants of Englewood simply hate anyone with white skin. Chicago cops are high value targets here and yet another cop gave his life simply trying to keep the peace.

This time it was a 42 year-old, eleven year Chicago police veteran. His name won’t be released after someone tells his wife and children that he’s not coming home ever again.

There was one offender shot by police returning fire that’s said to be in critical condition at a local hospital. The investigation is still under way and more will be known later.

This ghetto culture of violence is a direct result of enslavement through entitlements. Schools run by committed Socialists conveying the message that there is no need for ambition, excellence or self-reliance have made this monster.

Ebonics is tolerated and encouraged along with a bankrupt culture that makes the darkest African jungle seem civilized. The forces of evil have been fueling this lost civilization for way too many generations. Their self-genocide may be the only solution.
Posted by Paul Huebl Crimefile News at 7/07/2010 05:22:00 PM

Sotoberg had no kids. He should have trained jujitsu instead of triathlon. The goof that took the gun away from Sotoberg had mental issues. Well gosh darn..don't they all.

Its more dangerous in Chicago than it is in Bagdad.At least in Iraq you can have one Ak(real) per houshold.

I have only heard accounts of how treacherous Chicago is. My sister was a University student and her and a friend went to this part of town that cops said they don't even go to and it was late at night. Luckily for them when a bunch of thugs came around, three big black women left their security bullet-proofed glasses to body block the stupid students and yell at the police to come get them. I can't remember the street off the top of my head, but this happened about a decade ago.

I have nothing but respect for LEOs like him.