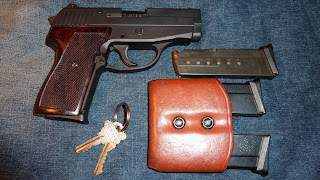 Chicago, IL—For the second time in a week a Chicago resident has defended his home by shooting an intruding felon with a gun outlawed under Chicago’s 30 year-old ban.

This time it happened after police were chasing Aaron Marshall, 26 for fleeing on foot after a traffic stop where narcotics were dropped. Marshall ran and selected a house to break into and possibly hide. Marshall apparently picked the wrong home in the 300 block of North Pine to invade. An unidentified home owner shot Marshall after he’d broken through a window of that house.

Marshall suffered a non-life threatening gunshot wound to the left side of his body. He was taken to Mt. Sinai Hospital where he’s being treated at this hour.

Marshall's criminal background includes a felony drug conviction in 2009 and a 2007 conviction for felony aggravated unlawful use of a weapon, court records show. Police say Marshall also is a gang member with a lengthy arrest record.

Of course Mayor Richard M. Daley has done all he can to empower robbers, rapists and killers by keeping law-abiding Chicagoans disarmed through the gun ban. Again we see another example of resistance to mayoral tyranny saving lives.

It will be later this month when the U.S. Supreme Court rules on the legitimacy of Chicago gun ban. So far in both recent incidents where citizens have used banned guns no charges have been brought by police.

The Illinois Legislature addressed city gun bans after Hale DeMar shot a home invader in the Gun Free Zone of Wilmette, IL. This makes it nearly impossible for police to charge people violating the gun ban if the gun/s are discovered after a self-defense incident.

Sec. 24-10. Municipal ordinance regulating firearms; affirmative defense to a violation. It is an affirmative defense to a violation of a municipal ordinance that prohibits, regulates, or restricts the private ownership of firearms if the individual who is charged with the violation used the firearm in an act of self-defense or defense of another as defined in Sections 7-1 and 7-2 of this Code when on his or her land or in his or her abode or fixed place of business.

Yeah, what's up with that Paul? Was a 45 not available?