Will Hate or Reason Dictate Outcome of Murder Trial? 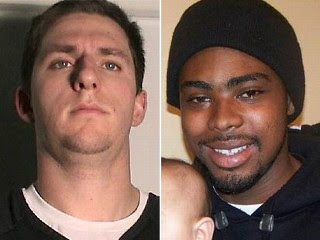 Mehserle is the young cop who shot and killed Oscar Grant on a transit platform on New Year’s Day in 2009. Grant was being subdued and handcuffed by several officers when Mehserle removed his service weapon from its holster and shot Grant in the back. It sounds so simple but it’s not.

The shooting of Oscar Grant was a YouTube Sensation because several people in the hostile crowd pulled out cell-phone video cameras and captured the incident. They quickly posted the videos on YouTube with their own misleading and incendiary commentary.

In the past 40 years police agencies all over have experimented and deployed all manner of non-lethal gizmos and sprays as an alternative to force that will seriously injure or kill. Quite popular are the Tazer stun guns with police administrators and local politicians. I have taken exception to this device for a lot of reasons.

There is only so much room on a patrol officer’s belt for equipment. There is the service weapon, extra ammunition, handcuff case, baton ring, portable radio and a key ring. The more crap you add the more complicated things get. When you are required to carry a new device like the stun gun your developed, reflexes and muscle memory goes to Hell. Survival dictates that you watch your suspect and possible accomplices and not the equipment on your belt.

When it comes to police equipment it’s administrators and politicians that decide what will be carried not the officers required to carry the crap.

Apparently the reason that Grant is dead is not because of a wanton desire to kill him but the cop grabbed the wrong pistol grip. Instead of grabbing the Taser gun he grabbed the Sig .40 caliber duty pistol instead. That was an ugly mistake but a mistake none the less.

Next we have to talk about Oakland, California. Oakland is the Hate Epicenter of the United States for African-American extremists. The Black Panther Party was spawned here and cops, especially White cops are targets of hate and deadly race based assault.

Oakland’s African-American community wants the blood of this young cop. The threats against this lad are such that anyone killing him in a on the street, jail or prison would be considered a Black Hero.

There is no basis to rationally believe this was more than an accident where the victim was willingly engaged in risky behavior. You also have to believe that the young cop’s attention was fixed on his own and fellow cop’s safety when this accident occurred. Any well trained officer would be observing a 360 degree area for additional threats especially in the cop hating capital of the world.

This case was only charged because prosecutors could not deal with Oakland’s hateful African-Americans.

Can a Los Angeles jury be fair? This case does not belong in a criminal court but a civil venue where a jury should be dealing solely with the issue of civil negligence.

Watch my long time friend Christi Paul of Headline News report on violence that gave prosecutors no options but to prosecute.

What a see here is an honest yet horrible mistake. Under the stress of not knowing how many other dangerous cop haters(white policemen to boot)could be ready to inflict grave harm upon him.
My true outlook on the situation is.
"ONE LESS GOBLIN" on the street, or being supported by taxpayer money, in jail"
I say. "MAY HE REST IN HELL"...

this guy put himself in harms way, just like rodney king did years ago......you get whats coming and no one can tell what that is....if you gamble with your life, sometime the piper must be paid.. As far as the cop goes, you know I am not fond of cops with the way i was treated..I know these new taser guns have a grip like a gun, but there are bright yellow....we he drew it and obtained target acquisition?? didnt he see the yellow ???? the sight rail is yellow....I do think it was an accident, because I dont think he would of done that in front of all of those people, buy who knows

Phil,
You’d have a good point if the shot was some distance away but this was within an arm’s reach and instinctive shooting rather than getting a sight picture is the norm.

You said it correctly when you said, “Who knows?” If it’s a case of “Who knows?” That’s reasonable doubt and the lad needs to be acquitted.

Then we will watch Oakland burn down. Of course this time it won’t be those nice homes in the hills.

It is time to stop kowtowing to a relatively small group of irresponsible individuals, who respond like children when things do not go their way. If riots happen because the justice system "works" for a change, let those who can, protect their own.

you are right about the proximity of the situation( after watching the video again) and who knows what was beyond the camera frame who was in a threating posistion at that moment...OK give him a pass but that was a huge mistake and i am not sure if I would want him in my neighborhood making another one of those mistakes....oh but wait, that wouldnt happen in my neighborhood??would it?

It was a ghastly mistake but not a crime.

A ghastly mistake, indeed. One that the general public would never understand. I doubt the poor lad would get a fair trial anywhere.